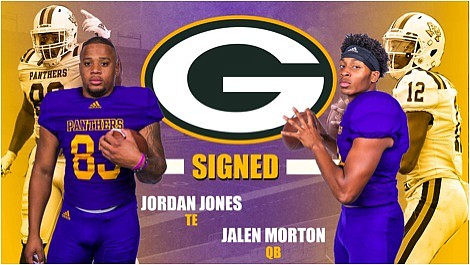 The end of the 2020 NFL Draft did not stop two players from Prairie View A&M University from fulfilling their dreams of making it to next level. Quarterback Jalen Morton and tight end Jordan Jones signed with the Green Bay Packers as undrafted free agents.

“It's an extremely great opportunity for these guys, and it speaks a lot to what we have going on within our program," PVAMU Head Football Coach Eric Dooley said. "For the second straight year we have had players getting the opportunity to continue doing what they love. This speaks volumes about our coaching staff and what we have been able to accomplish in terms of not only honing in on their skills on the field but staying on them academically as well."

Prairie View had one of the most dynamic offenses in the NCAA led by Morton and Jones. They helped the Panthers average 35.5 points per game to go along with 483.9 yards per contest in 2019. Both statistics lead the Southwestern Athletic Conference (SWAC).

Morton accounted for over 5,000 yards passing and 64 touchdowns during his time on “The Hill” and he had an outside chance of hearing his name called in the later rounds of the draft. One reason it did not was due to the coronavirus pandemic that cancelled what would have been a chance for NFL scouts to see him up close and personal at the 2020 HBCU Combine on last month. With a 39.5-inch vertical jump and a 4.57 40-yard dash time, he would have placed himself on some teams radar.

"He [Morton] comes from an athletic family and is a guy that checks all the boxes as far as size, athleticism and ability to play the position and read defenses,” said Dooley.

A familiar face will be joining Morton in Green Bay. 2019 All-SWAC First Team tight end Jordan Jones will also be looking to secure a roster spot with the Packers. The redshirt senior also had a phenomenal career at Prairie View, finishing his career with over 900 yards receiving and 11 touchdowns.

"Jordan is an exceptional athlete with great size and the ability to play multiple positions," Dooley said. “Green Bay is going to find out that Jordan should have been drafted, but he will make the most of this opportunity."

These two young men join a list of Panthers that have made the leap into the NFL over the last two seasons. Both will finish with degrees from Prairie View, which is another goal both players set out to accomplish when they arrived on campus.

Jalen Morton hopes to set the trend for HBCU quarterbacks to get more of an opportunity in the NFL following the likes of the late Steve McNair and Tarvaris Jackson.

"Prairie View A&M produces productive Panthers,” Morton said. “Hopefully this opens up a lane for other quarterbacks within the SWAC as well as at the HBCU level.”