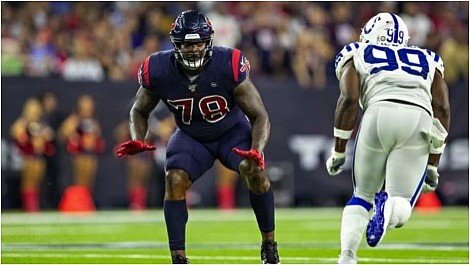 After signing a three-year $66 million contract extension last week with the Houston Texans, offensive lineman Laremy Tunsil became the highest paid player at his position in the NFL. Did the money play a major factor in him getting the deal done? Yes. But Tunsil had another strong motive on why he wanted to set the market for an offensive lineman.

“I just wanted to reset the market, become the highest paid offensive lineman just to show all the young players under me that anything is possible,” said Tunsil. “You've just got to put your head towards it.”

The 2018 Pro Bowl selection was traded from Miami to Houston before the 2019 regular season began and did not negotiate a contract extension with the Texans right away. That led certain NFL analysts to believe that Tunsil would be looking for a huge payday if he played at the level he was known for the previous three years with Miami. He was only called for one holding penalty the entire season and was one of the main reasons quarterback Deshaun Watson was able to stay upright for most of the 2019 campaign. 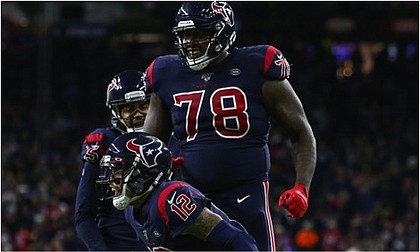 Houston’s offensive line had given up 62 sacks before his arrival, but those numbers decreased to 44 with Tunsil manning the left side of the line. One issue that plagued the former 13th overall pick in the 2016 NFL Draft last season was the multiple false start penalties (14) which he attributed to arriving at the end of the Texans training camp and trying to learn the playbook.

“The main thing with me last year was the playbook,” he said. “I came at a late time, only had a couple of days to prepare for the game. But just to have that whole season, then this offseason under my belt, I think it's going to help me with this playbook and my relationship with the players, and us being on the same page. I think that's going to help a lot.”

One player Tunsil has been able to stay on the same page with is the aforementioned Watson who he says he has been working out with at least four times a week to keep the continuity stable. They both believe that Houston has the tools to compete in a heavily talented AFC as long as they continue to be cornerstones of not only the offense, but the team.

Tunsil, 25, negotiated his own extension with the Texans after firing the agency (CAA) who represented him coming into the league. The move may seem unconventional to some, but not to him since other players like All-Pro cornerback Richard Sherman, acted as his own agent when he signed his deal with the San Francisco 49ers in 2018. Ironically, it was Sherman’s former teammate during his playing days with the Seattle Seahawks that advised Tunsil in his negotiations with Houston.

Five-time All-Pro Linebacker Bobby Wagner negotiated a deal similar to Tunsil’s with the Seahawks last year. Representing himself, Wagner inked a three-year, $54 million deal to keep him in Seattle.

Tunsil would love to get back to working out at the Texans facility as soon as possible, but he is also aware of what is going on in the world with the coronavirus global pandemic. The Lake City, Florida native made a $250 thousand donation towards the COVID-19 relief fund to be divided between the Florida Gateway Food Bank and Houston’s Star of Hope Mission.

“I just want to use my platform to give back as much as I can, and hopefully spark the minds of other people to give back in critical times like this. So, that was my biggest thing,” Tunsil said.