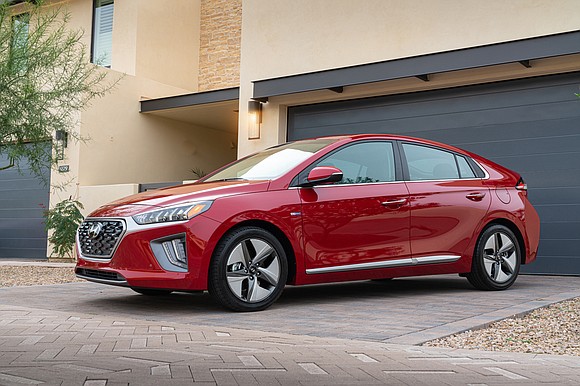 The Hyundai Ioniq is a car of the future. That’s because it comes in three electrified versions: hybrid, plug-in hybrid and all electric. We had the hybrid.

The car had an EPA rating of 55 mpg in the city, 54 mpg on the highway and 55 mpg combined. Of course, the caveat is that mileage can differ depending on driving habits.

Well on most the readouts we got during excursions, the Ioniq HEV got 46 mpg. That was pretty good.

The powertrain for this type of mileage was a 1.6-liter gasoline direct injected Atkinson 4-cylinder engine coupled with a permanent magnet synchronous electric motor.

There was a 240-volt Lithium-ion Polymer battery with hybrid starter generator and a six-speed dual clutch automatic transmission.

This combination was impressive – for a hybrid. Acceleration was good. There was enough oomph for interstate driving. We had no trouble generating speed to pass.

The Ioniq HEV shifted gears smoothly, cornered well and handled day-to-day traffic without any problems. Sight lines were adequate, though relatively small, the car never seemed overwhelmed by traffic. It even had paddle shifters, but we didn’t bother with them.

Inside, the 2020 Hyundai Ioniq HEV had a floating touch infotainment screen. There was a black piano strip under it and that was where the controls as in invisible haptic buttons were. This was clean layout, with just a volume button.

Under that control bar was an open cave like bin that held two 12V plugs, a USB jack, and the pad for wireless charging. Inside the center console was a fast-charging USB jack.

Our test model had what we’re calling quad pushbutton controls as in: start stop lock unlock. There were heated front seats, the driver’s seat was power, and it had a power lumbar support.

There was a single instrument circle in front of the driver that served as the speedometer. It was also a TFT screen that showed mileage, speed, direction and gave the driver other information. On each side was the power output of the battery and the fuel gauge. We thought the power folding mirrors were a nice touch.

The back seat was spacious for a compact car. There was plenty of head and hip room. Although the tunnel was not that pronounced it would be difficult for three people to sit abreast.

Our test vehicle had a gray interior with gray stitching. The Ioniq was bean shaped. It had a sloping snout and a blunt rear end. Oh, lest we forget, the car was a hatchback.

We had the limited trim model which was the top of the line. It had LED headlights, smart cruise control with stop & go, an electronic parking brake, a 10.25-inch navigation system, ambient interior lighting (ours was blue), and a premium audio system.

Round all this out with satellite radio, voice controls, internet streaming and we found the Ioniq HEV to be a well-equipped fuel-efficient car. Prices start at $31,000.