Democrats Must Ace The Agenda Test

Now as Trump rolls out his virtual convention, they must ace the agenda test. They need to argue the case for the bold agenda that this country desperately needs, and challenge Trump for his policy failures.

The Democratic National Convention focused on the character test. Speaker after speaker contrasted the decency of Joe Biden against what Trump’s own sister called the “phoni- ness” of Donald Trump, a man she said of “no principles, none.”

The convention introduced Ka- mala Harris to the country, highlighting her remarkable journey from the child of immigrants, the student at Howard University, California Attorney General and senator to the presidential ticket. Jill Biden demonstrated her commitment to family and to teaching.

The convention displayed the character of the party -- its diversity, its inclusiveness, its concern for justice. In powerful presentations, Michelle and Barack Obama made the case about why Trump is just not up to the job of president, particularly in a time of crisis. “It is what it is,” as Michelle concluded. 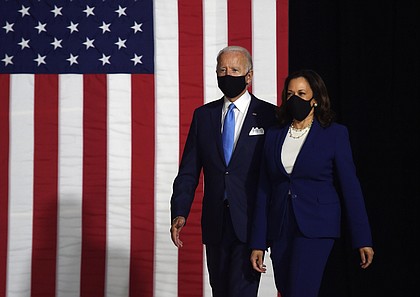 A masked Joe Biden and Kamala Harris walk to the stage where they will make their first appearance on the Democratic ticket together./Credit: Olivier Douliery/AFP/Getty Images

That left little time to address the agenda. It’s not that it does not exist. The Democratic platform -- largely a product of the task forces put together by Biden and Bernie Sanders -- details a broad, progressive agenda for change. Biden’s own web page and speeches over the course of the nominating process have presented elements of his program. But no one but political junkies read party platforms, and few probe candidate websites. It is now up to Biden and Harris to lay out their case -- and contrast it with Trump’s failed administration.

The priorities are clear. In the immediate short-term, Trump’s

catastrophic mismanagement of the pandemic must be replaced by a com- prehensive national strategy to get the pandemic under control so lives are saved and the economy can start up again.

The 30 million people who have been forced onto unemployment -- dis- proportionately lower wage workers, disproportionately black and Hispanic -- need immediate assistance. Trump and the Republican Senate stood in the way of the needed rescue package, objecting to continuing the $600 a week enhance- ment to unemployment insurance, aid to the U.S. Postal Service to manage the expected surge in voting by mail, aid to cities and states facing massive layoffs of police, teachers, transit workers and more after their budgets were busted by the economic collapse and the costs of dealing with the pandemic.

Already another round of lay- offs is expected, and 20 to 30 million families are threatened with eviction or foreclosure in a pandemic. Schools are struggling with reopening without the resources needed to pay for the protec- tions health officials say are necessary. Yet Trump and McConnell refused even to meet Democratic House leaders half- way to get a bill done.

In the longer run, major changes are needed to make this economy work for working people.

We need a bold initiative to re- build America’s infrastructure and make it sustainable, a transition to renewable energy to fend off already costly climate change and create millions of good jobs.

We need major investment in science and technology so America can regain its lead in innovation and job growth. We need a new trade strategy and industrial policy that rebuilds good jobs at home, ensures we make essential products here in the U.S., and demands a balanced playing field from China and other countries that trample trading

At the same time, we need to ensure that workers gain a fair share of the profits and productivity that they help generate. Biden has promised to lift the minimum wage to $15 an hour. We need to empower workers to orga- nize and crack down on labor rights abuses by corporate managers. The economic bill of rights for essential workers should be detailed and readied for passage. Paid family leave and sick leave is vital. Affordable, high-quality child care essential for working parents and their children.

The health care gap must be closed, with affordable health care for all guaranteed. The education gap must be closed, with resources for public schools from pre-K through college. Biden has promised tuition-free educa- tion for all students whose families earn less than $125,000 a year in contrast to Trump’s lack of concern for the burden mounting student debt. The wealth gap must be addressed, with progressive taxes helping to reverse the extreme inequality that now threatens our de- mocracy.

We must address the constitu- tional right to vote. The right to vote should be protected, with restoration of the Voting Rights Act, automatic voter registration, expanded vote by mail and

early voting, an end to partisan gerry- mandering, and limits on big money in politics. Biden should support the constitutional amendment to guarantee the right to vote in America.

The systemic racism built into our criminal justice system must be redressed. Equal pay for women should no longer be an issue.

The priorities are many. Biden and Harris must be aggressive in putting forth their agenda, explaining its import and defending its elements. Trump has already made it clear that his campaign will be based on lies and libels about the Democratic agenda. He has already called Biden the “puppet of the radical left,” who wants to “defund the police “and “abolish the suburbs.” He’ll bur- lesque the Democratic agenda across the country. It is vital that Biden and Harris argue their case. If they do, there is no question that they will ace the agenda test that Trump has already failed. They have little more than two months to get that done.

You can write to the Rev. Jesse Jackson in care of this newspaper or by email at: jjackson@rainbowpush.org Follow him on Twitter at: @RevJJackson.