Vote: It Is Up to All of Us 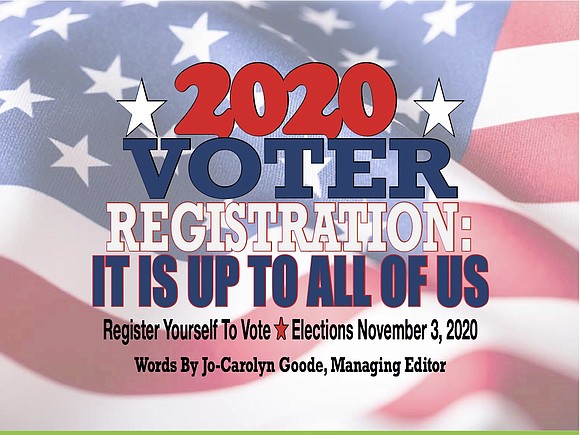 These are critical times in which we find ourselves. Besides living during this global pandemic, race relations are boiling over, immigrations issues continue to rip families apart, healthcare is not available for all, and issue after issue keeps mounting with more frustrations and less of viable solutions. America is in deep turmoil. Many citizens live and breathe today in a state of unrest. They are uneasy about the life of their children, relatives and themselves making this election one of the most important. Voting like our lives depend on it is not a sound bite, a good campaign slogan, or empty words. This quite literally is one of the truest statements of this election.

Out of all the rights granted to American citizens the one that should be the most cherished and protected is that of the right to vote. Being able to have the right to raise one’s voice in deciding who will represent your thoughts and ideas in government is one of the purest forms of justice there is.

The history of voting started with no clear rules regarding eligibility. Voting power was granted by the states with most white men having the right to vote. As time passed, clear voting eligibility criteria was drafted making the right to vote a form of legal segregation prohibiting women and nonwhite men from voting. There would be many who fought, marched, cried, spoke up, and got knocked down before real voting reform took place.

August would become a very important month in regards to the issue of voting. Prior to the passage of The Voting Rights Act of 1965, there was the Selma to Montgomery marches. A number of nonviolent activists organized the marches along the 54-mile stretch of highway to protest the rights for African Americans to vote from March 7-21, 1965. The first march became known as Bloody Sunday for all the blood that was shed by the marchers from getting beat with billyclubs and having tear gas thrown on them. The late Congressman John Lewis thought he would have died as a result of his participation in the march. But he would go on and be a strong advocate for civil rights. The efforts of the many were not in vain as the Voting Rights Act was signed on August 6, 1965, and discriminatory election processes were removed that once held women and minorities back. However, those rights would be threatened in 2013 by a ruling of the Supreme Court ending protections that the original legislation protected.

Another historic August date would be August 26, 1920, when women were granted the right to vote by the passage of the 19th amendment. But this legislation did not include women of color. The Voting Rights Act of 1965 did fix that problem. This year we celebrate the centennial anniversary of the woman’s right to vote.

Good thing about this current time is that you still have time to make your voice heard in this election. As of this week, we are approximately 40 days away from October 5th (the deadline to register to vote), 43 days away from October 13 (the start of early voting), and 69 days from November 3rd (Election Day).

How to Register to Vote

Check to make sure you are eligible:

*Be a resident of the county where you submit the application

completed your sentence, probation, and parole)

mentally incapacitated without the right to vote.

*Fill out a voter registration application online at https://webservices.sos.state.tx.us/vrapp/index.asp. Print it, sign it, and mail it to the voter registrar in your county of residence.

*Register in person at your county Voter Registrar’s office.

*Register by mail by obtaining an application from your county Voter Registrar’s office or pick up applications at libraries, government offices, or high schools.

Show Up to Vote

Whether early voting or voting on Election Day make sure to have proper identification.

Application for Ballot By Mail