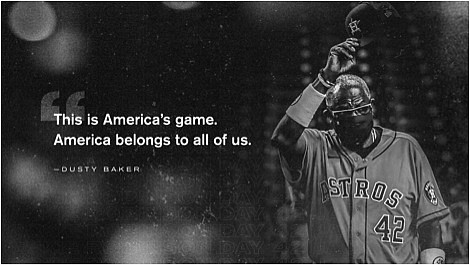 “I'm not concerned with your liking or disliking me... All I ask is that you respect me as a human being.” Jackie Robinson

On Friday, Major League Baseball teams celebrated former Negro League and Major League player Jackie Robinson who broke the color barrier in the MLB by becoming the first African American to play in the modern era in 1947. Robinson played during a time where the negro was looked down upon for the color of their skin. Many believe that the negro players should stay in the league they were given and leave the Major Leagues to the white players.

Robinson was ridiculed and insulted everywhere he traveled. He was not allowed to stay with the team on road trips or eat at the same tables at restaurants. Players from other teams even threatened to boycott games he played in. All the while, Robinson still had to deal with everything that was going on back in his hometown and hometowns of others he knew. Police brutality and white supremacy still ran rampant through the south as news made its way to him how relatives, teammates, and friends had been beaten, shot, and even killed because the color of their skin which made them a target.

That was the 1900’s. Fast forward to 2020 and African Americans are still dealing with the same social injustices today. With the murders of George Floyd, Botham Jean and Breonna Taylor just to name a few by law enforcement officials. Professional Athletes around the world have grown weary of turning on the television or logging on to their social media accounts and seeing video of unarmed African Americans being shot and killed by the police.

The latest incident was the shooting of Jacob Blake, an African American resident of Kenosha, Wisconsin who was recorded being shot seven times in the back by the Kenosha Police Department. That sparked outrage and began the protest by American citizens who are tired of seeing these types of things happening right here in their own backyard. It also sparked a movement by professional athletes, the majority of who are black to say, “No More!”

In the NBA, the players decided not to play their scheduled playoff games in protest to the latest shooting and left the season hanging in the balance. WNBA players also decided to take a stance and do the same. NHL players let it be known that they too were well aware of the mistreatment of African Americans and sat out Stanley Cup Playoff games. MLB was no exception as games were postponed by teams due to the fact that a majority of players refused to play, and their teammates stood in solidarity with them.

The Houston Astros and Oakland A’s took the same approach in their game on Friday at Minute Maid Park. Houston had been off the last two days as they played a doubleheader against the Los Angeles Angels on Tuesday and had their Wednesday game cancelled due to the threat of Hurricane Laura making its way towards Houston and the surrounding areas. The weekend series against the A’s was also in jeopardy but was able to be salvaged as the hurricane took a different path once it made landfall.

Both teams did not warm up and as game time approached, the Astros position players took the field after the national anthem as the remaining player from both teams stood along the first and third base line respectively observing 42 seconds of silence for Jackie Robinson. At the end of the observation, both teams tipped their caps towards each other and walked off the field.

Team jerseys with the number 42 on the back was placed in each batter’s box and a Black Lives Matter t-shirt covered home plate. 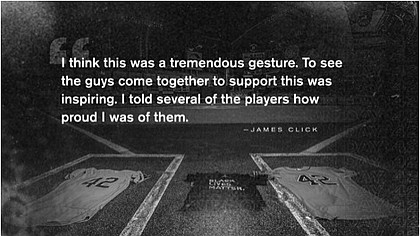 Astros manager Dusty Baker was unaware of his team’s intentions earlier in the day as he spoke with the media in his daily pre-game press conference. What he expressed was the need and desire for change to happen in this country as he has lived through social injustices and racial tensions his entire life.

“It’s getting worse and worse in the country,” Baker said after been shown the latest incident via video from his son. “Something has to be done and something has too stop. You are supposed to feel safe in this country and not threatened or afraid.”

Astros players were represented by veteran outfielders Michael Brantley and Josh Reddick at the press conference after both teams made it back to the clubhouse to explain how the decision was made on not playing Friday night.

“Once we realized everyone was at the ballpark today, we had a meeting amongst ourselves,” said Reddick. “After discussing it with everybody we made the decision to do what we did today. We felt that this message was bigger than just missing another game. We wanted to show support to our brothers not only on our team but across the league as well. To let them know we have their backs everyday no matter what goes on.”

Brantley, who is part of the Players Alliance, spoke about the interaction he has with other players around the league to discuss these types of issues. He reiterated that they want change and that they will continue to push forward to make it happen. 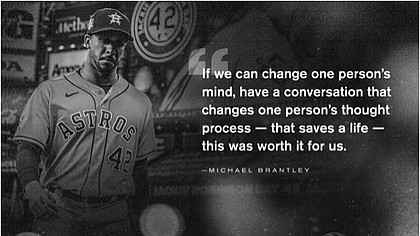 The Astros organization was not sure if the Oakland A’s would be willing to take part in the postponement of the game since they were also involved in the same situation with the Texas Rangers on Thursday as they both announced that they would not play due to racial injustice and systematic racism. A’s manager Bob Melvin let it be known that him and his players which include former Astros player Tony Kemp were all in.

"I woke up this morning, and I've always known the story of Jackie Robinson, but I had a different view today," said Melvin who has taken it upon himself to become more educated on the societal issues that surround this country. "I was angry today. I was sad. I was all of the above. So, I was looking forward to putting this jersey on. I have the utmost respect for No. 42 and his play."

Astros general manager James Click said that owner Jim Crane and the rest of the organization was on board with the players decision.

“Our Job right now is to support them 100 percent,” Click said in a press conference alongside Dusty Baker. “Just seeing the guys come together and support this was inspiring.”

The two also spoke highly of the team and how much admiration they had for them to be able to come together on one accord and take a stand on an issue that has our country divided.

“I don’t think it’s enough words to say for what it means for these guys to stand up and use the platform they have to bring attention to the serious issues that are facing this country” Click said. “Proud doesn’t put the right words to it.”

Baker also chimed in about the guys he gets an opportunity to work with and share his knowledge of the game and life on a daily basis.

“When I look at these guys. We have been through a lot this year. But this probably is the closest I have seen these guys together,” said Baker about his team. “Dialogue is the key. Conversation is the key. They are beginning to understand each other and have empathy on what each other goes through.”

Major League Baseball had taken a very proactive measure towards social injustice coming into a short season due to the global pandemic caused by COVID-19 by allowing “Black Lives Matter” t-shirts to be worn during pre-game activities. Players are not penalized for taking a knee or staying in the clubhouse during the playing of the national anthem.

The game between the Astros and A’s will be part of a doubleheader on Saturday with the first game starting at 3:10pm. Both clubs will honor Jackie Robinson during Game 1.