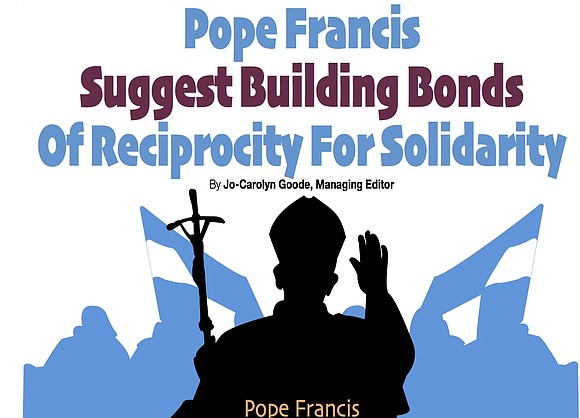 A common phrase that I have heard since the pandemic started is the need for something better to be birth from it. Whether that is a new skill, career opportunity, cleaner environment, the desired outcome was always to be better or something to be made better. Pope Francis wrote an op-ed for the New York Times with this same air of the world and its residents being better coming out of this pandemic. His thoughts were that people would be better by being more connected to each other on a personal level and being less selfish to be more empathic to one’s pain. This could make kinder people and a kinder, more understanding world.

Before the good there is always the bad. In his article, Pope Francis criticized the United States government (without actually blatantly saving the name) for their response to the COVID crisis of putting political power over the needs of people amid the rising number of deaths that has hit way past the one million mark. He further criticized groups that support this unsafe logic by protesting rules of wearing masks, social distancing, stay-at-home orders, and travel restrictions as an invasion of their personal freedoms.

Pope Francis faulted the government and the people in protest for lack of empathy and advised they should look for the good and not the bad as it relates to issues. “Looking to the common good is much more than the sum of what is good for individuals. It means having a regard for all citizens and seeking to respond effectively to the needs of the least fortunate,” said Pope Francis.

At an early age, Pope Francis learned how to find that common good as well as how it intertwined with the role that science plays in healing people. A date etched in the mind of Pope Francis is August 13, 1957. On this day, he became ill with a type of flu that was so severe in nature it required hospitalization for him. He had difficulty breathing so a hefty amount of water was removed from his lungs and part of the right lobe of his lungs was removed. However, that was not the only care administered in which to save his life. Usually, the knowledge of doctors is credited to saving one’s life but for Pope Francis he credits nurses. Nurses Cornelia Caraglio and Micaela, using previous patient care experiences, followed their instincts to increase his medication dosage beyond what doctors had prescribed. Their examples of empathy and knowledge with experience and the toughest of his illness taught him “to depend on the goodness and wisdom of others.”

Really this experience helped shaped the work that Pope Francis does today and further grew his desire to help others.

“In lockdown I’ve often gone in prayer to those who sought all means to save the lives of others. So many of the nurses, doctors and caregivers paid that price of love, together with priests, and religious and ordinary people whose vocations were service. We return their love by grieving for them and honoring them,” said Pope Francis as he pointed out the lesson today’s frontline workers are teaching the world. “It is better to live a shorter life serving others than a longer one resisting that call.”

In order to come out of the pandemic better than when we started we all must change. We need to stop thinking globally. That is too broad for people to connect to. It leaves some feelings that problem is too big and too far reaching for them to help. Pope Francis thinks having a closer human connection to people’s problems puts their issues in our faces and forces us to deal with it, hopefully in a positive way. Looking at our world, COVID-19 is just one of the problems the nation is up against. There are the problems of systemic racism, immigration, climate change, and so on. “These tragedies may seem distant from us, as part of the daily news that, sadly, fails to move us to change our agendas and priorities. But like the Covid-19 crisis, they affect the whole of humanity.”

Pope Francis calls people to “dream big, to rethink our priorities — what we value, what we want, what we seek — and to commit to act in our daily life on what we have dreamed of.”

To achieve dreams of good health, wealth, and the ideal life people need each other. Anyone who has reached the pinnacle of their goals will say that they did not get there alone. Someone believed their dream was possible. Someone pushed them when they wanted to give up. Someone was their sponsor when they had no funds. Someone was their board to bounce off ideas. Someone was their conscience, advisor, and biggest cheerleader. It is called solidarity.

“What ties us to one another is what we commonly call solidarity. Solidarity is more than acts of generosity, important as they are; it is the call to embrace the reality that we are bound by bonds of reciprocity. On this solid foundation we can build a better, different, human future,” said Pope Francis.

Pope Francis was born Jorge Mario Bergoglio. He is the 83-year-old the head of the Catholic Church and the bishop of Rome.