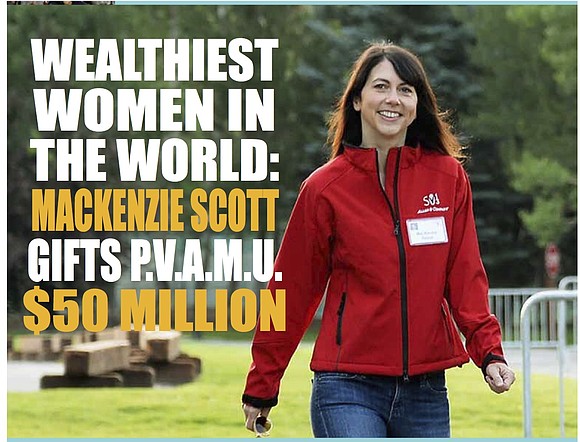 Prairie View A&M University will be able to produce a lot more productive people thanks to a $50 million donation from billionaire philanthropist MacKenzie Scott.

“Those funds remain designated for financial aid and will continue to be disbursed to students over the next several years, supplementing other forms of financial aid,” said Dr. Ruth Simmons, university president.

Simmons was completely caught off guard by the donation. Simmons and Scott had numerous conversations about other issues and never hinted at the generous gift.

The $50 million is the largest ever in the 144-year history of the university and is also the largest donation any HBCU has received. Scott gave Prairie View A&M the donation to use as they pleased. Officials already have a plan on how they will spend the money.

Ruth J. Simmons, President of Prairie View, commented, “This is a historic gift for Prairie View, coming at a time when the University had already decided and begun to invest heavily in key areas to strengthen its academic programs and improve student success. The timing of this gift could, therefore, not be better.”

Prairie View will use $10 million dollars to create the Panther Success Grant Program that will assist upperclassman in financial need due to COVID-19. According to the release, those funds remain designated for financial aid and will continue to be disbursed to students over the next several years, supplementing other forms of financial aid. A portion of the donation will also go towards financial aid for other students. In a press release, Prairie View indicated that a portion of the funds will go to the university’s endowment fund for university faculty, recruitment, scholarships, and fellowships. With Scott’s donation, the university increased their endowment by 40% to a tune close to $130 million. Prairie View now has the largest endowment at a Historically Black College or University (HBCUs).

There is something extra special on “The Hill” as they have been the recipient of a number of sizable donations recently. Prairie View

received $1 million for the Center for Race and Justice from HEB Chairman Charles Butt; $1.5 million from the Mellon Foundation for Afro-American Studies and faculty development; $1.5 million from Houston Endowment for the College of Education; $1 million from Bank of America for career services; $850,000 from Vistra, Inc., to improve educational opportunities for students, $2 million from community leader Shari Griswold for scholarships; and many more.

Scott has blessed close to 400 organizations with bountiful gifts including Black Girls CODE, RAINN, the Obama Foundation, and the European Climate Foundation.

These donations are part of an agreement Scott signed called the Giving Pledge initiative in which she promised to donate a majority of her wealth.