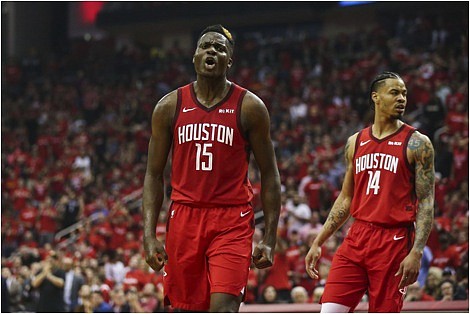 Houston – In a mega four-team trade that included 12-players, the Houston Rockets have parted ways with center Clint Capela, forward Gerald Green, and back-up center Nene’. The Rockets acquired forwards Robert Covington and Jordan Bell from the Minnesota Timberwolves along with the Atlanta Hawks 2024 second-round pick via the Golden State Warriors.

Capela, who has called Houston home for the last six years was averaging 13.9 points and 13.8 rebounds this season. His biggest contribution came during an eight-game stretch in late November and early December of this season where he averaged 20.5 rebounds.

Injuries have plagued the big man who was selected 25th overall in the 2014 NBA Draft. He missed the last three games with a heel injury which forced Houston to play a smaller lineup with the tallest player being forward Danuel House Jr. at 6’6. In the 11 games, Capela has missed this season, the Rockets are 10-1.

Covington, 29, started his career in Houston back in the 2013-14 season has become a very good defender in the NBA. He is currently averaging 12.8 points and six rebounds this season and will bring a defensive tenacity to the Rockets to go along with forward P.J. Tucker. A career 35.8% three-point shooter, Covington will also add some value on the offensive end for Houston as well.

By shipping Capela, Green, and Nene’, Houston has $12 million in cap space that leaves general manager Daryl Morey room to operate before the trade deadline ends on Thursday. Although they have back-up centers Tyson Chandler and Isiah Hartenstein on the roster, Houston will still seek a formidable center that can be inserted into the lineup when the Rockets run a traditional offense.

Houston is set to play back-to-back games against the Los Angeles Lakers and Phoenix Suns which means that Covington and Bell could see action as soon as Friday or they could make their Rockets debut in Houston on Sunday when the team plays the Utah Jazz.