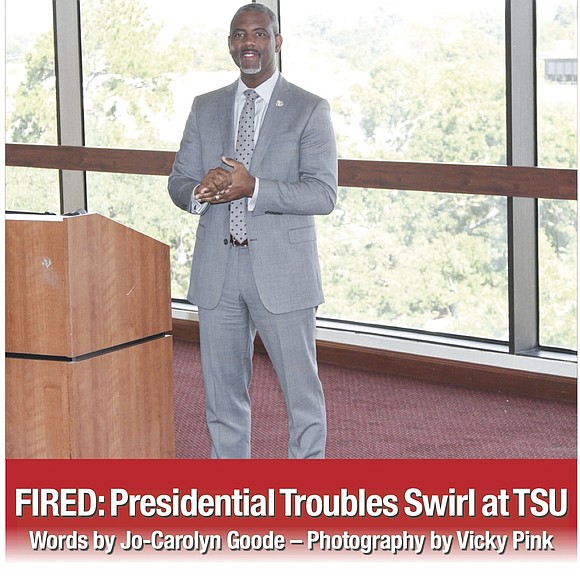 Students, faculty, and alumni know all roads lead to Texas Southern University but apparently not for ousted university president Dr. Austin Lane. After a five hour closed door meeting, the Board of Regents voted 6-1 to remove Lane from office early Wednesday morning.

The Board of Regents cited several reasons for the firing of Lane via a written statement including:

(1) “failure to advise and fully report” to the board his knowledge of any actions that could cause harm to the University; and

“The board is committed to ensuring all activities at the university are conducted in an ethical and transparent manner in accordance with the university’s mission, vision, and values,” a November 2019 release stated.

It was discovered that an investigation into TSU’s admission process found no problems in regards to the fall 2017 and fall 2018 semesters. The investigation was closed in July 2019 according to the Houston Chronicle.

An alleged complaint received stated that staff members were encouraged to increase the enrollment at the university regardless if the student met admission requirements or not. Following that investigation, the board of regents met to place Lane on an administrative paid leave and make Chief Financial Officer Kenneth Huewitt as interim president.

The board issued a statement saying, “Our students and alumni worked hard to get here, and deserve our best efforts to protect Texas Southern for now and for the future. Indeed, that is why the board and the chief internal auditor are cooperating with law enforcement officials who are conducting their own investigations.”

Earlier this week, the regents met with Lane in a closed door five hour meeting where they accused him of not properly reporting the former law school assistant dean’s involvement in the admission scandal that allowed the fraudulent transfer of one student to the law school. Lane was also cited for the assistant dean facilitating the fraudulent admission and scholarship of another student in exchange for $14,000. In addition, the assistant dean was faulted with supplying false LSAT scores to the review board. Further charges accused Lane of unapproved excessive entertainment expenses paid by the TSU Foundation. However, the TSU Foundation president said that was not true.

Lane was further questioned also about the resignation of the law school dean Dr. James Douglas. The board stated that Lane’s actions, or inactions, was “ injury to the trust” placed in him “by the Board to manage and lead the University on a day to day basis.” Proceedings were issued to begin the firing process of Lane.

Lane is not going done without a fight. According to his contract, he has 30 days to “cure the allegations set forth herein if a cure can be made.”

“As you can see clearly today, they didn’t mention anything that links anything to myself or any of my administration team. You didn’t hear one fact that they were able to prove with anything they said today,” commented Lane about the board’s decision. He further told the Houston Chronicle, “The board is mismanaging and they are trying to make sure they do my job.”

Many alums stands in support of Lane and have started a petition for his reinstatement.

Lane has maintained his innocence throughout the investigation.