Something to Cheer For

Roughnecks defeat the Wildcats in front of large home crowd. 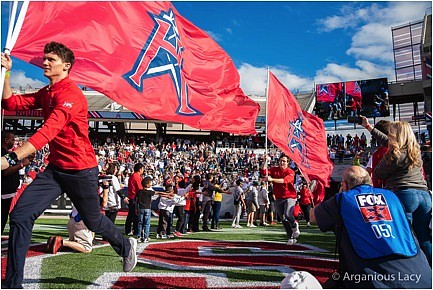 In the song, “Welcome to Houston” by famous rapper Slim Thug. There are two lines that stand out by another famous rapper (Z-Ro) that encapsulates the mantra of the city. Midway through the song, Z-Ro bellows out these words with pride in his voice:

We go get it and come back with it until we take our last breath.

That verse had to be on the minds of the Houston Roughnecks (1-0) yesterday as they opened up their inaugural season at TDECU Stadium against the Los Angeles Wildcats (0-1) in front of a very loud and boisterous crowd of over 17,000. The Roughnecks scored 25 unanswered points to defeat the Wildcats by a score of 37-17. 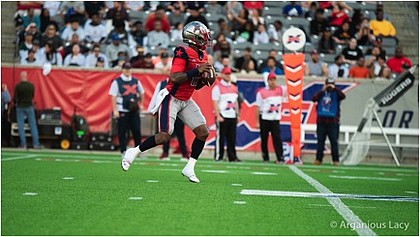 “I thought the crowd was amazing,” said Roughnecks starting quarterback, P.J. Walker who finished the game with 272 yards passing and four touchdowns. “I was barely able to hear coach Jones calling plays it was so loud.”

Houston got the fans on their feet early when Walker connected with wide receiver Cam Phillips for a 50-yard touchdown pass on their opening possession to start the game. The Roughnecks failed on their two-point conversion attempt but led 6-0 after running just three plays.

The Wildcats would respond with two touchdowns from quarterback Charles Kanoff (one rushing, one passing) and built a 14-6 lead before Walker pulled off a brilliant five-play, 73-yard drive that ended when he found running back James Butler in the flats for a 16-yard touchdown that cut the lead to 14-12. Los Angeles would regain the lead on a 35-yard field goal by Nick Novak, but the Roughnecks responded with another Walker touchdown pass to wide receiver Sam Mobley to take a one-point lead into halftime. 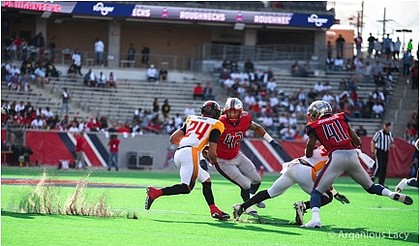 “I was proud of the kids for hanging in there,” Roughnecks head coach June Jones said to reporters after the game. “I thought we were beating ourselves earlier in the game by dropping a lot of balls and missing some open guys. We were lucky to have two early takeaways from our defense in the first half to keep us in it.”

The Roughnecks defense came out in the second half with a point to prove and it showed. They fed off the energy from the crowd and held the Wildcats scoreless, limiting them to a measly 58 yards in the final two quarters. Led by defensive end Kony Ealy, Houston was able to apply a lot of pressure to the Los Angeles quarterbacks that resulted in five sacks and 16 quarterback hits for the game.

“Houston’s defense made some adjustments that gave our offense some trouble,” Wildcats head coach Winston Moss said. “They didn’t (L.A. quarterbacks) respond very well and that led into stressing and putting more pressure on themselves.”

There seemed to be no pressure from the Wildcats defense as Walker picked right back up where he left off in the first half. The former Temple quarterback led three scoring drives to give the Roughnecks their first victory of the season.