Don’t Waste Your Right to Vote 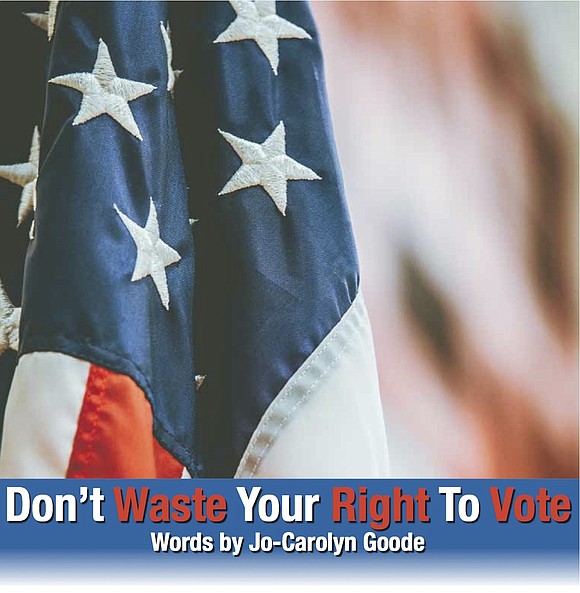 The right to vote came to the later groups after many marches, speeches, protests, and dehumanizing and humiliating tests. Knowing this bit of insulting history behind this most sacred right how can anyone of today who living and breathing freely fix their lips to say "I don't want to vote." You do not have the right to remain silent. Our inalienable rights are being challenged daily and voting is the only power we have to stop it by putting the right people that express your thoughts in office. Not voting is not showing the other guy that you don't approve of him; it actually helps him when you are silent. Don’t use the transportation excuse for not voting because of there plenty of people and to the polls. Just ask. The "I am not registered" excuse won't work either because although registration for this current election done, registration for the November election is still open. So stop the excuses, the barriers to voting have been removed. Your voice is needed and wanted. Don't let the work of those of yesteryear be in vain. Stand up. Speak up. Go vote.

When you go vote make sure to bring your ID. Many have said requiring the showing of your government issue ID to vote is a form of voter suppression since so many brown people, elderly and the poor may have difficulty acquiring one. Barriers include lack of transportation to get one and the inability to pay for one. On the other side of this argument are those who say requiring the photo ID for verification of an individual prevents voter fraud.

A law passed in Texas requiring citizens to bring their ID in order to vote. Seven forms of governmental id are acceptable. They are

If you don’t have an ID, you may still vote, with a supporting form of ID and executing a Reasonable Impediment Declaration.

You now can vote at any polling location. Voters are no longer required to go to assigned voter locations and may vote at any location in the county. Polls are open from 7 a.m. to 7 p.m. But some locations may require a few citizens to fill out a Statement of Residency form to prove they stay at an address.

When you go into the voting booth be prepared to be there a little. The ballot is lengthy. This is why you need to know your candidates ahead of time or else this process can be extremely overwhelming. An informed voter is the best kind. Research the candidates and their platforms to make an educated vote.

Some of the hottest races are…

There are 17 names on the ballot, some of which have already dropped out of the race. The names are in alphabetical order. Know your candidate to make sure you select who you want. The top contenders are Pete Buttigieg-D, Tom Steyer-D, Michael R. Bloomberg-D, Elizabeth Warren-D, Joseph R. Biden-D, Andrew Yang-D, Bernie Sanders-D, Amy Klobuchar-D, and Donald J. Trump-R (incumbent).

The candidate is Gene Wu-D.

The candidate is Ana Hernandez-D.

The candidate is Christina Morales-D.

State Board of Education, District 6 Trustee

Houston Style’s Education Writer Kimberly McLeod is on the ballot for the State Board of Education, District 6 Trustee. The Republican candidate is Will Hickman-R. Go Kim!

The candidate is May Walker-D (incumbent).

The candidate is Phil Sandlin-R (incumbent).

The candidate is Joe Stephens-D (incumbent).

The candidate is Lincoln Goodwin-R (incumbent).

The candidates are Jeremy L. Brown-D (incumbent), and Wanda Adams-D.

The candidate is Holly Williamson-R (incumbent).

The candidates are Genesis E. Draper-D (incumbent) and Linda Garcia-R.

This is just a sample of viable candidates running to represent you. Get to know them by learning about their platforms and plans for our city, state, and nation. Make an informed choice. Make sure to vote and take as many as you can to the polls.