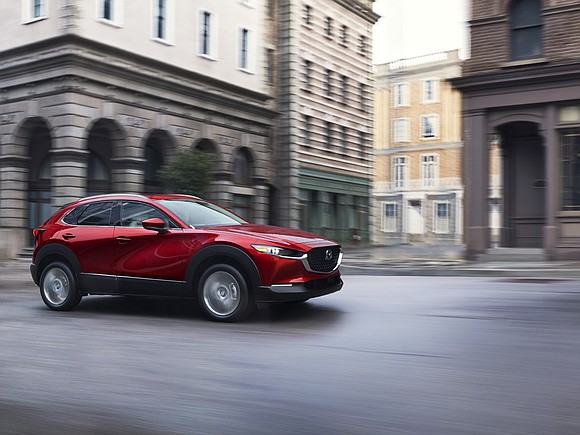 The short story is as the automobile market continues to shift towards crossovers and sport utilities, Mazda created the CX-30 to meet a need. That’s what they told us. But the small crossover also fills out the automaker’s crossover lineup, giving it a full-size, mid-size and now small crossover.

Its Kodo 2 design which means soul in motion was started 10 years ago. Mazda said the CX-30 is the second model to adopt the latest evolution of its Kodo design, a more mature interpretation of their design ethos, flowing shoulders over the wheels, a long snout and short rump and a winged grille dominating the front end.

Mazda’s winged grille was sharper and deeper. It was meant to be suggestive of forward motion. The bottom line was that the front-end look was cleaner, simpler and smoother. The design did suggest forward motion which is what the automaker wanted. The diagonal angle of the rear window gave the CX-30 a coupe-like silhouette, especially looking at it from the rear and the narrowed arch shape of the liftgate made the body look shorter and wider.

What they were after was a vehicle with the sleek cut of a coupe and the bold style of a sport utility. We think they achieved that, but the crossover looked a little taller than a coupe. The Mazda CX-30 was designed in Europe with black cladding all round to separate the top two thirds from the bottom.

Mazda has a minimalist design philosophy. Its vehicles have a simple but flowing look. The same was true for the 2020 CX-30. Now on sale, consumers have a choice of nine colors.

The CX-30 had curving lines over the fenders, a hallmark of Mazda design. The rear was wider and the lift-over was lower for easy access. We were able to easily put three roller bags in the cargo area, that was with the rear seats deployed, for the drive to Palm Springs from where we departed for home.

All trim lines of Mazda’s newest crossover are equipped with a 2.5 liter four-cylinder engine. The powerplant made 186 horsepower and it delivered a matching 186 pound-feet of torque to the pavement through a six-speed automatic transmission.

Mazda said the compact crossover was equipped with a new off-road traction assist feature, which can potentially help the driver when adventuring on uneven terrain. When the diagonal wheels lose traction, off-road traction assist will stop reducing the engine torque and increase the brake force on the wheels without traction. This transfers power to the wheels still on the ground to help allow the vehicle to regain traction and continue the drive. G-Vectoring Control Plus and front-wheel drive are standard, but we had the all-wheel drive which is available on all trim levels.

We never went off road or even onto gravel. The local roads here climb through the mountains as we headed Northeast to Palm Springs; they were two lanes, tight turns and not nearly as smooth as Interstate highways. But they were a good test of the Mazda CX-30’s maneuverability, power on inclines and the suspension. The crossover passed all three with relative ease.

The interior was a combination openness and intimacy. The 2020 Mazda CX-30 did not feel like a small vehicle. There was plenty of space, the seats forced you into better posture, or to sit up straighter, and though that seemed uncomfortable the vehicle was just the opposite. Mazda said that the “rich brown leather” lent an air of quality and depth even in the base models

Instruments were driver focused. Just about everything was tilted toward the operator of the CX-30. The dash was expansive and seemed to curve right into the doors. And the surfaces were very soft to the touch. The interior was meant to convey speed and spaciousness. It certainly was spacious but speed, that depends on how fast we’re talking.

Engineers rethought how a vehicle works; the seating position was meant to mimic upright postures; the gas pedal was designed to let the calf muscle do most of the work rather than the shin muscle. Even the ride motion was engineered to match the human motion of walking by softening the side walls on the tires. They simplified the suspension movement. The result was a smooth riding vehicle.

We drove prototype CX-30s. They all had an all-wheel-drive system that could deploy 100 percent of its torque to the front wheels and up to 50 percent of the torque to the back wheels when needed. The system enhanced cornering and performance. It would shift torque to rear wheels at speeds of 75 mph for improved handling.

Premium trim lines come with heads-up displays and cylinder deactivation as well. And an interesting factoid is that the CX-30 is expected to hold up to 60 percent of its residual value after three years.

Noise, vibration and harshness had been reduced. While on the road we found the CX-30 to be extremely quiet. There was not much wind or road noise. The audio system had been restyled to direct sound directly to your ears with fewer impediments.

There was no CD player nor was there a touch screen. The CX-30 can use small thumb drives. Mazda’s theory is touchscreens take drivers’ eyes off the road, they represent cognitive, visual and manual distractions. “You have to look at it, reach for it and touch it to use it,” we were told. That’s why their vehicles don’t have touchscreens.

Mazda researchers found that it takes about three weeks for owners to learn to operate the controls by feel. The center console armrest slides back then opens. We were a little disappointed there was only one USB jack. The CX-30 also had its own Wi-Fi hot spot. It is free for the first six months and $20 dollars a month thereafter.

As we said the seating positions made us feel like we were sitting straight up. We thought that we would end up being uncomfortable but that wasn’t the case. By the end of the drive which covered about 150 miles through the mountains we were almost as fresh as when we started.

The touch surfaces were soft, more so than we’ve noticed in other vehicles. Handling was good, certainly there was nothing truck like about the CX-30. And the brakes were outstanding, a couple of times we had to really get on them and were quite satisfied with the results.

Because the infotainment screen was not a touch screen it could be placed in the middle of the dash and sunk. An angled depression let us see the bottom. It was a very clean look. Sound proofing was excellent. Once a motorcycle was passing us and we could not hear it until it pulled up alongside of us as it passed.

Mazda is known for quality vehicles, slick designs and the reputation of selling everything it makes. We expect the 2020 CX-30 to continue that tradition.