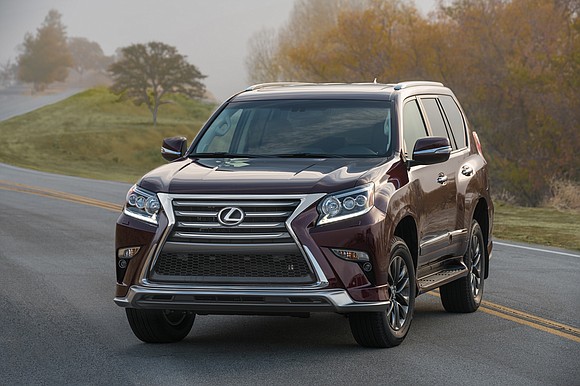 There is no way around it. The Lexus GX 460 is a throwback to the time when big, powerful, body on frame sport utilities were aspirational vehicles. During that era, it seems like the clarion call was the bigger the better.

The GX can carry up to seven passengers. Our three-rowed luxury sport utility had captain’s chairs in the second row with heated seats and dual video screens attached to the back of the front seats.

It was powered by a 4.6-liter V8 that made 301 horsepower and 329 pound-feet of torque. It was matted to a six-speed automatic transmission. If you care about gas mileage, the GX 460 is not for you. In the city, it had an EPA rating of 15 mpg and on the highway, it could get 18 mpg and it got 16 mpg combined. Little wonder that with the 23-gallon tank full, it had a range of slightly more than 300 miles.

To be sure, the LX 460 is not for those who are counting their pennies. It is for families with a healthy cash-flow, have kids and choose not to sit at home. They are out doing stuff.

With a 6,500-lb. towing capacity, the LX 460 can be an ideal boat hauler. Towing is aided with Trailer Sway Control, a function of the Vehicle Stability Control that enhances straight-line tracking. That’s what Lexus said.

Combined with the second row, the third-row seats fold and create a virtually flat cargo floor. With both rows of seats folded, the Lexus GX 460 has an expansive 64.7 cu. ft. of cargo space. That makes for a great carrier of antiques, fresh fruits and grocers that one might pick up at used furniture shops and farmers’ markets.

When those rear seats are occupied by little people, there were video screens attached to each front seat that could stream all sorts of entertainment to the back to keep the peace.

Lexus engineers have done much to tamp down the truck-like ride of the GX 460. In fact, it did not feel like a truck at all. There were several drive modes: comfort, sport and normal.

The suspension had a system that controlled damping heights. In the front was an adaptive variable setup with adjustable height control. In the rear, there was a four-link rigid axle.

Although the Lexus GX 465 is a luxury sport utility, it had all it needed to ruggedly tackle off road terrain. There was leveling technology. It had a full time four-wheel-drive system, a crawl control system with five low speed settings and a two-speed transfer case.

And while you are sloshing through the woods, you can do so in comfort in the Lexus GX 460. There was leather interior trim, a moonroof and wood overlays. The driver support package on our test vehicle included a premium audio system, adaptive cruise control, lane departure alert, automatic high beams and a wide view front and rear monitor.

About the only thing that irritated us about the GX 460 was that it didn’t have a lane change signal. We had to fully engage the turn signal to change lanes, if we wanted to be safe so we did.

Of course there were the usual suspects: voice controls, satellite radio, a navigation system, Bluetooth, audio streaming from a smart phone, push button start and stop as well as push button lock and unlock, a backup camera with rear cross traffic alert, blind spot monitor and Lexus Enform with its suite of apps.