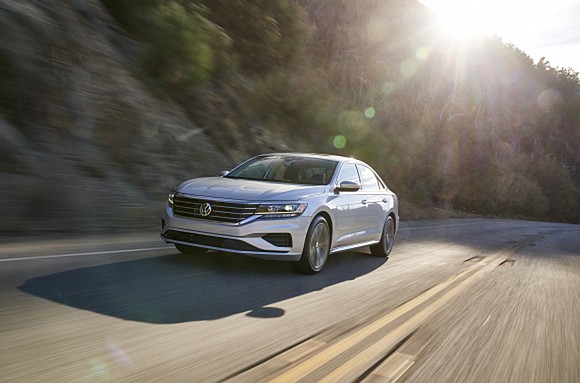 Simple clean straight lines are often the best. And that’s what we found when climbed into Volkswagen’s 2020 Passat.

There was a touch infotainment screen housed in glass and there was a long horizontal display that made the interior look wide. But what really set this off was the fit and finish. There was not a gap anywhere.

The odometer and speedometer were large and with easy to read numerals. The former had a temperature gauge in the bottom of the circle while the fuel gauge was at the bottom of the speedometer. There was a TFT screen between the two. It had keyless lock and unlock and implicit with that was pushbutton start stop.

As we toggled through the different information on the TFT, the front-wheel drive sedan had a range of 370 miles. That was after almost one week of driving. Granted we didn’t do much, this state is just opening back up, but still that wasn’t bad.

The Volkswagen Passat was a conservatively styled sedan. But in its own way it was slick. Leather seats were comfortable. There was stitching but it was restrained, only around the seats and the headrests.

Beneath the 6.3-inch wide infotainment screen was the tri-dial climate controls. In between them was the air flow directions and the switches for the heated seats. Beneath that was a deep bin. It held the USB jack and the 12V plug. The button for the stop, start was flush on the console next to the gear shifter.

We got into the back seats and found them expansive. We checked and there was 57 cu. ft. of shoulder room. There was plenty head room and legroom bordered on unbelievable. The backseats were heated and there were two more USB jacks.

There was a hump, even though the Passat was front wheel drive. But the back seat was so spacious that whoever was on the hump would be uncomfortable but comfortable. We looked in the trunk and it too had an awful lot of size with 15.9 cu. ft. of space.

For 2020, the Volkswagen Passat got new sheet metal. Only the roof panel remained from the old model. Volkswagen said it gave the car a bolder look. But we think it gave the car a statelier look. The lines were crisp, even though there were a lot of creases, especially in the hood, the fit and finish stood out.

The car had slim headlights, a dominant grille, what VW is branding as a tornado line along the side and daytime running lights. Along with the taillights, all external illuminators were LED. Our SEL trim line had 18-inch alloy rims.

We also had adaptive headlights with range control and cornering lights. And there was a power-tilt-and-slide moonroof.

The Volkswagen Passat was powered by a 2.0-liter turbocharged direct inject four-cylinder engine that made 174 horsepower and 206 pound-feet of torque. Sounds meek but it had a lot of oomph because maximum torque kicked in at a low 1,700 rpm. This car had diesel-like acceleration.

The engine was mated to a six-speed automatic transmission. There were no paddle shifters on our trim line, but we could shift manually using the gear stalk. This transmission has been branded Tiptronic and it has been around since 1990.

There were automatic headlights, rain-sensing windshield wipers, and an automatic dimming rearview mirror. Heated side mirrors with integrated turn signals were also standard, and our sideview mirrors had a power-folding function and memory.