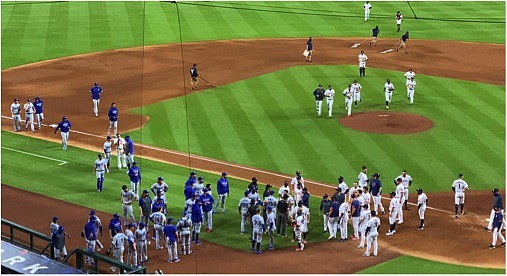 Both benches cleared at the end of the sixth inning.

Ever been out somewhere and notice a fixture that causes you to reminisce about the past? It could be a park that you and a significant other use to go to just to talk. Or that one restaurant that you used to go to as a kid that just took you back to your younger days? Now not all memories will be pleasant. Some of those places could take you back to some tumultuous times in your life and cause some real emotions to stir up.

I can imagine that’s what life must have been like for the Los Angeles Dodgers on Tuesday as they came to Houston for the first time since the 2017 World Series battle between them and the Astros. Houston would win that series in seven games and claim their first World Series title in franchise history.

The World Series banner that can be seen clearly from the opposing team’s dugout was a constant reminder of what could have been for the Dodgers and on Tuesday they let all that anguish and hurt spill over onto the field. Some players from that team are still fuming over the report that came out in the off-season that Houston used a very sophisticated system to steal signs during home games in 2017.

Los Angeles (3-2) defeated Houston (3-2) by a score of 5-2 to take the first game of a two-game series between the two teams. The Dodgers trailed 2-0 going into the top of the fifth inning before exploding for five runs and taking the lead for good. Yet it was the bottom of the sixth inning when the real fireworks happened. 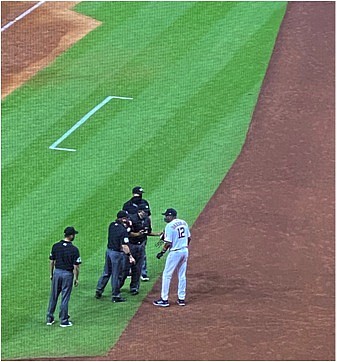 Dodgers relief pitcher Joe Kelly got behind in the count to Astros hitter Alex Bregman and threw the ball towards Bregman’s head. Two batters later, Kelly would throw pitches towards Carlos Correa’s head as well before getting him to strike out swinging. Kelly immediately started jawing with Correa and making condescending gestures towards the Astros bench as he walked towards the dugout. Both benches would clear, and pitchers ran out of the bullpen to their respected teams as both clubs exchanged words towards each other.

“When you throw a 3-0 fastball over a guy’s head, now you’re flirting with ending his career,” Astros manager Dusty Baker said about the pitch thrown by Kelly. “Balls get away sometimes, but not that many in the big leagues.”

Baker also expressed his frustration and anger on what started the entire fracas to begin with and his disdain for how the umpires handled it.

“What really enraged everybody is when he told Carlos…he struck him out and he told him, ‘Nice swing, [expletive].’ What are you supposed to do with that? What upset me is the umpire warned us. Why don’t you warn him? He’s the one throwing the ball and he’s the one who started this mess in the first place. I don’t like it at all.” 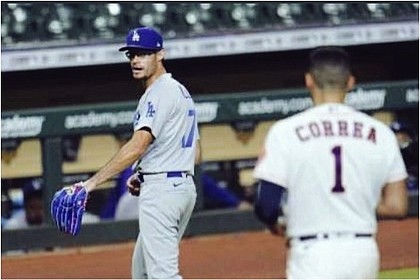 Kelly said he had no ill will feelings towards Bregman or the Astros after losing to them in the 2017 American League Division Series when he was a member of the Boston Red Sox. He reminded the media that his former team had beaten the Astros in 2018 on their way to a World Series victory over the Dodgers.