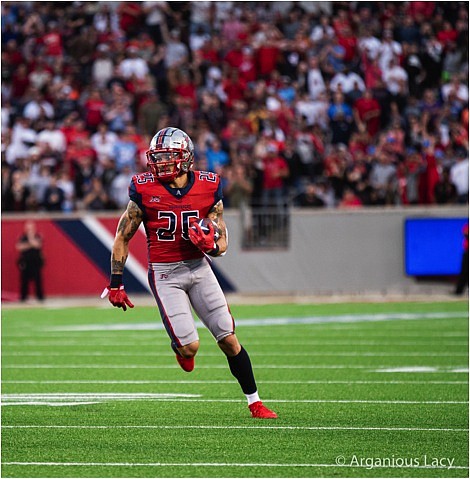 No statement is more accurate to describe the Houston Roughnecks (4-0) victory over the Dallas Renegades (2-2) in the “Texas Throwdown” by a score of 27-20 on Sunday to remain the only undefeated team in the XFL. Houston used three first quarter interceptions off of Renegades quarterback Landry Jones to set the tone for the game and would end the game with a total of five takeaways (3 interceptions-2 forced fumbles).

“We talk about those takeaways all the time,” Roughnecks head coach June Jones said after the game. “Our defense just kept hanging in there. We needed to score more points when we had our chances with those takeaways.”

Houston now has eight interceptions in four games and leads the league in forced turnovers with 11.

The Renegades were determined not to let the PJ Walker-to Cam Phillips combination defeat them as they devised a defensive scheme to render the consecutive XFL Star of The Week recipient (Phillips) null and void throughout the game. The XFL leader in receiving was held to a season low one catch for nine yards.

One thing I have learned by watching the Roughnecks this season is they are a very resilient group of young men who adapt to adversity quickly and that’s just what Walker (239 yards passing and two touchdowns) did on Sunday. With Phillips being blanketed by the Renegade defenders all day, Walker found running back Nick Holley early and often throughout the game. Holley led all receivers with eight catches for 97-yards and a touchdown.

“I thought Nick Holley played great today,” Walker said. “We need guys to step up when they try and take Cam away. We just have to go out there and make plays.”

Dallas kept the game close after their quarterback (Jones) put them in a horrible position in the first quarter. They scored 11 second quarter points to go into the half down by only four points (15-11) and would come within one point of Houston in the third quarter before disaster would strike Jones and the Renegades offense again.

Early in the fourth quarter, Jones would be stripped by Roughnecks linebacker Edmond Robinson at the Renegades 12-yard line and Robinson scored off the miscue to put Houston up by a score of 27-20 after the failed two-point conversion attempt by Houston.

“I couldn’t believe it happen,” said a jovial Robinson in the locker room. “I didn’t even know the ball was still on the ground so when I saw it I just picked it up, ran to the end zone and then straight to the sidelines.”

That would be all the points the Roughnecks needed as they would come up once again with a huge turnover late in the fourth quarter as Dallas threatened to score inside of the Houston five-yard line. Linebacker DeMarquis Gates would recover a tipped pass off the hands of Renegade receiver Flynn Nagel to secure the Roughnecks fourth consecutive victory.

Houston welcomes Seattle to TDECU Stadium on Saturday as they go for win number five. Kickoff is at 1pm.