The Emergence of Butterfly Ali 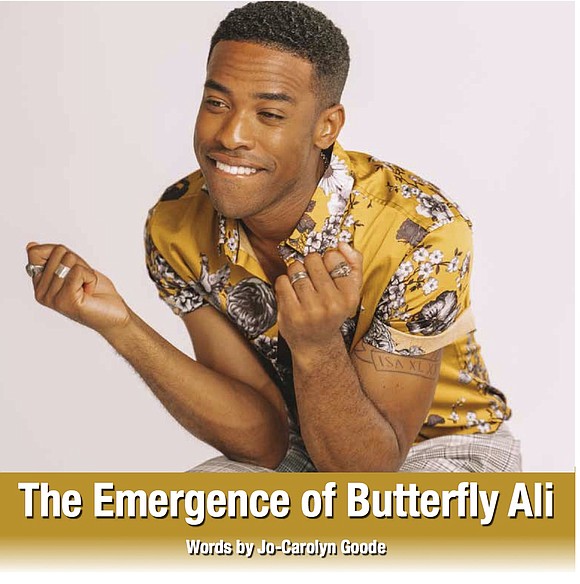 Butterflies are some of nature’s most beautiful creatures mainly for their various phases of life that allow them to transform through a process called metamorphosis. Humans are like butterflies too constantly changing to reinvent themselves.

Titus Makin is a name that we are all coming to know from his acting repertoire. He has had roles on “Glee,” “Star-Crossed,” “Pretty Little Liars,” “Grey’s Anatomy,” and “The Path.” Now we can catch Makin on-screen in his new starring role on ABC’s “The Rookie.” He plays legacy rookie by the book officer Jackson West. The show has been picked up for a second season. Makin has said to expect a lot of drama, romance, and guest appearances as the squad gets a bit of a shake up. Although we tried to squeeze more information out of Makin all we could get was that his character Jackson may loosen up a slightly in this new season with the help of a new flame. Alright now Jackson!

From his on-screen love to his personal #1 love; Makin is making time for his personal passion, music. Ladies and gentlemen meet Butterfly Ali.

Who has not heard of the infamous quote from award winning boxer Muhammad Ali, “Float like a butterfly, sting like a bee. The hands can't hit what the eyes can't see.” It has been the inspiration for so many things including one of Butterfly Ali’s early songs. “I just literally felled in love with it,” he said as he told of why he favored it so much that he also chooses to use the quote as a muse for his alter ego. “It is an artistic expression. I took the strength of the butterfly that Muhammad Ali would quote about in his training where you can be a beautiful thing and assuming but very strong and powerful and I gave the props to Muhammad Ali for saying it,” said Butterfly Ali.

Butterfly Ali’s music can be characterized in a similar manner that it is strong and powerful and assuming all at the same time. The singer/songwriter has a very soulful background with music influences like Marvin Gaye, Pharell, Andre 3000, and Celo Green. He blames that vibe on his parents who had this type of music on repeat when he was growing up. It’s the combination of his musical interests coupled with his world travel as a military kid that has shaped the artistry of musical genre. “I have always been kind of a respectful rebel. I have always been drawn to the edgier things in life. It is always cool for me to draw outside of the lines.” He continued speaking about how his travels and interests equaled the “creative bug” that he is.

Drawn to the soulful corkier styles of music, Butterfly Ali is introducing himself with two newly released singles, “Rose” and “Righteous.”

Rose is a plea to a former relationship where he questioned if he had just let “the one” slipped through his fingers. Where “Righteous” takes a different approach that calls for one to look at their own flaws and faults before judging others on that same criteria. “It's like why are you acting so self-righteous. Don’t forget we are all just as screwed up.” Both songs are very personal for Butterfly Ali as they are based on real life circumstances. He hopes others can learn from his experiences.

Although “The Rose” and “Righteous” are the only singles out now they, not the only songs that Butterfly Ali has that are ready to be released. He, along with his writing partner, has enough songs to debut an album. But they don’t want to rush the process. The goal is to allow people to get to know Butterfly Ali personally and musically to grow the fan base. He has plans to tease out singles slowly to grow that relationship with listeners.

As you come to know Butterfly Ali, let me tell you more about Makin the person. Born Titus Odell Makin Jr. in Honolulu, Hawaii in June 1989, he bounced a crossed the U.S. with his family due to his father’s military service. This allowed him to experience different cultures and forms of entertainment. He started taking dancing and singing lessons when he was very young and his sister was the one interested in acting. The acting bug bit him after he saw the movie “Step Up” in high school when he realized he combined three talents into a career. From that point on he started taking acting lessons, when he secured the lead role in his high school’s production of “1940’s Radio Hour” he hooked. Bring out the big lights for Makin saw his name in the stars. After his high school graduation, he headed to the New York Conservatory for Dramatic Arts' for professional training. He left New York to live out his dreams in Los Angeles where acting gigs quickly rolled his way.

Follow Makin socially to learn more about the actor and singer/songwriter. Be watchful for new music this month from him. Whether you float like a butterfly or sting like a bee be sure to keep your hands on whatever you see from Butterfly Ali.