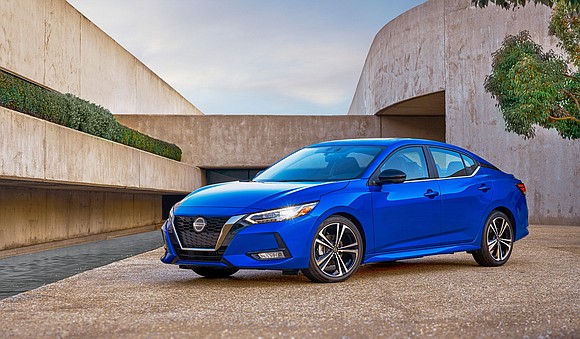 We did not get as much seat time in the 2020 Nissan Sentra as we would have liked thanks to the lock-down brought about by the coronavirus.

But we did spend enough time to come away with an opinion about the car – it is big in a good way. We do not mean physical size but the 2020 Nissan Sentra drove big. That is not bad for a compact car and a new chassis did not hurt.

Nissan made what it called extensive upgrades to the Sentra’s platform. The most important was a new independent rear suspension. This opened rear seat room; enough to accommodate a six-footer.

We did not climb in the back seat during our really short time behind the wheel. But we did note the openness of the back seat and we did not need to sit in it to tell that it was spacious and comfortable.

To handle the bigger dimensions of the 2020 Nissan Sentra, the car got more oomph under the hood.

For 2020, the Sentra’s engine was bumped up from a 1.8-liter four cylinder to a 2.0-liter four cylinder. Horsepower increased to 149 which was a 20 percent improvement over the previous model. And more importantly, torque was improved 17 percent to 146 pound-feet.

This engine provided more than enough power for the day in day out routine of driving. We found it responsive and more than powerful enough. About the only thing we did not like was the continuously variable transmission or CVT. But it was not just this one, we do not like them period.

Still, for a CVT the Sentra’s was not bad. The car’s acceleration, a weak point for most CVTs, was enhanced with a D-mode step shift program that simulated shifts, giving the Sentry a more natural acceleration feel without holding a high rpm constant, letting rpms build as speed builds. The D-step logic control helps provide enhanced drivability with a stable, natural and crisp shift feel.

It is hard to believe that the Nissan Sentra has been around for almost 40 years. And over that time it has evolved. Because of its new platform, the new generation was two inches lower and two inches wider. That gave it a presence that most compact cars in the past just did not have.

The press material said the Sentra’s premium presence of the exterior was highlighted by Nissan's signature V-motion grille, available thin LED headlamps and floating roof. Designers used sharp creases that blended into the muscular body sides. The rear had a lower roofline and wider shoulders, with wheels flush to the body enhancing the strong stance.

We had the top of the line SR, thus, it had LED lights all round: headlights, rear lights, DRLs and fog lamps. Our test car had a two-tone paint job, rear spoiler, 18-inch alloy wheels and black heated exterior mirrors.

We thought the heated front seats and the heated steering wheel on our test model especially noteworthy. The test vehicle had leatherette seats front and rear. There was a six-way power driver’s seat with a two-way power lumbar support.

There were extra things that you would not expect like automatic dimming mirrors, an around view monitor and a quilt pattern interior with orange stitching.