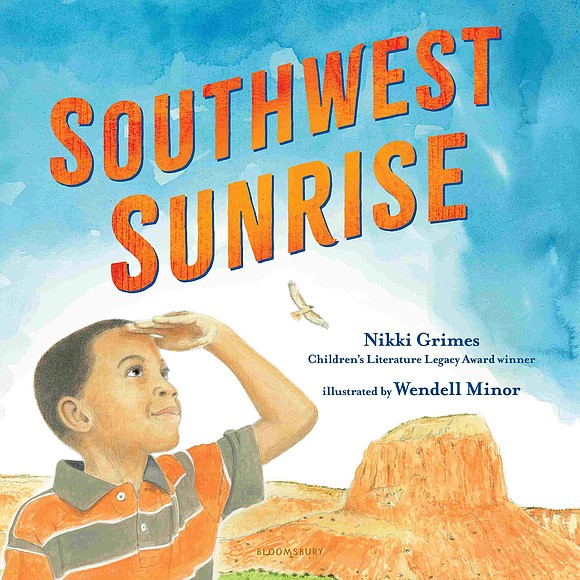 Your favorite toys are in a box and you don't wanna leave them there. All your games, your stuffies, your outside toys, packed away. You said goodbye to your friends and teachers because your family is moving and you don't wanna. But as in the new book "Southwest Sunrise" by Nikki Grimes, illustrated by Wendell Minor, just wait. When you get there, you might see things in a different color.

Jayden was not happy one little bit.

His father had gotten a new job in another state, in another part of the country, and Jayden hated everything about it. He loved New York and its skyscrapers and lights and busy-ness. From the airplane, he looked down at New Mexico and all he could see was shadows. It almost made him want to cry, except he was too big for that.

He went to bed, feeling really sad. In the morning, though, there was a sliver of sunshine peeking through a window that had no bars on it. Jayden saw a mountain that looked kind of like a rainbow, and that was a big surprise! He figured that would be just about the only color he'd see all day because "browns and tans are the only colors deserts are good for."

He grabbed the field guide his mother gave him, he opened the door, and got another big surprise!

In the grass behind his house, there were wine-colored flowers and "yellow bells" and orange and yellow and red and orchid all "dancing... in the wind." His house was kind of pink. There were green trees nearby and colorful birds on the branches. And the sky? It was a color of blue that Jayden didn't quite understand. He found lizards and bones and shells and all kinds of interesting things to look at.

Still, he missed the "wow" of New York and the size of the skyscrapers – until he saw that the desert had another surprise for him...

If there's one thing we adults have learned lately, it's that change is hard. When you're small and your world has turned opposite, it's doubly difficult. "Southwest Sunrise" may be able to help.

Right at the beginning of this story, author Nikki Grimes acknowledges that Jayden is unhappy and a little uninformed, both of which are validations that might get kids and parents talking. There's no minimizing of the main character's concerns, neither in story nor in the telling of it; instead, Jayden's concerns are taken seriously but with no drama on the part of his parents. That matter-of-factness steadies this tale, never letting it get out of hand on either side. Parents may also appreciate the leeway that Grimes gives her Jayden: in his new home, he's allowed the freedom to explore, which is another nice change.

Add in the soft illustrations by Wendell Minor, and you've got a soothing book for trying times. If that's what your child needs now, "Southwest Sunrise" is pretty and pretty perfect.