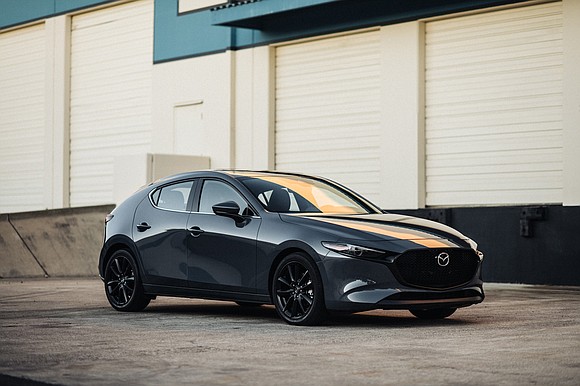 While test driving the 2020 Mazda3 Hatchback, we pulled into a parking spot at the grocery store and before we could get out of the car a young lady pulled in beside us. As we exited our test vehicle, she said, “I like the color of this car. I need to go get mine washed.”

That is the subtleness of premium and luxury cars: colors, lines, and style. Without a lot of fanfare, Mazda is moving its product line upstream and the Mazda3 Hatchback is the latest beneficiary.

Externally, designers have gone with a less is more philosophy. They have used their Kodo design theme to rid their cars of sharp body lines, creases, and taunt surfaces in favor of flowing lives and gentle curves.

But a designer told us many years ago that luxury is conveyed in the interior of an automobile. And that lesson seems not to be lost on the Mazda3’s interior stylists.

They used a leather-like material on the dash that looked like it had been folded around the floating infotainment screen atop the dash and the climate controls beneath. The whole dash looked like it was folded on top of itself. If minimalist but supple styling is now the in thing, then the Mazda3 is up to date.

But styling is not enough. The 2020 Mazda3 Hatchback with the automaker’s premium package was chock full of equipment. It had pushbutton lock and unlock as well as push button start stop.

However, the locking system was not universal. In other words, the back doors would not unlock unless we used the fob and then we had to engage the unlock function twice to get the rear doors to unlock. Carrying grocery bags can make this inconvenient if you do not want to open the hatchback.

Inside there was a huge speedometer flanked by a smaller odometer on the left and the temperature and fuel gauge in the same housing on the right. Controls for the smart cruise control were on the steering wheel as were the controls for the phone. It was a tight clean package.

Android Auto and Apple CarPlay, voice controls, Bluetooth, of course the rearview camera, satellite radio and regular radio were a part of the car’s enhancements.

This Mazda3 Hatchback had heated front seats, the driver’s seat was power, and it had a two-way power lumbar support. There was a USB jack and a 12V plug in the face of the dash and another of each inside the center console, which also housed the wireless charger.

The console itself had a piano black template. That is where the gear shifter was as well as the switch to put the hatchback into sport mode. Close to the driver was a mouse dial that could be used to access the car’s communication, entertainment, infotainment, navigation, and settings.

The Mazda3 Hatchback had an electronic parking brake that had to be disengaged every time we started the car. There was a small moonroof as well.

We climbed into the back seats and found them to be a little snug, but it was nothing that moving the front seats up a notch or two could not fix. There was a fair amount of head room if we were sitting back in the seat. Lean forward – a lot – and our head brushed the headliner. But who rides like that?

And let’s be clear, this is a four-passenger car. The tunnel is too tall and wide to allow an adult to straddle it.

Anyway, the Mazda3 Hatch was powered by a 2.5-liter four-cylinder engine that made 186 horsepower and a matching 186 pound-feet of torque. It was mated to a six-speed automatic transmission with paddle shifters. This combination rendered 24 mpg in the city, 32 mpg on the highway and 27 mpg combined.

Unexplainably, this engine sounded a little wimpy. But it had plenty of oomph both on surface streets and the expressways here. The ride was excellent; the suspension gobbled up bumps and divots in the road. Handling was particularly good.

The Mazda3 Hatchback was quiet; little road noise or wind noise entered the cabin. The Premium Package was comprised of the head up display, adaptive front lighting, leather seats and 18-inch black finish alloy wheels, the paddle shifters, LED lights all round and the moonroof.