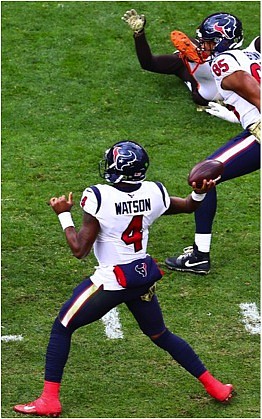 It’s almost becoming a cliché around the league and a statement that has been uttered numerous amounts of times on Houston sports radio and social media pages of Texans fans everywhere.

After an offseason that left him without his favorite target in wide receiver DeAndre Hopkins who was traded to the Arizona Cardinals and an early season firing of former head coach and general manager Bill O’ Brien. All Watson has done is overcome adversity and continue to keep the Texans competitive in the last five games they have played throwing for 1,447 yards (289 per game) 12 touchdowns and two interceptions that were thrown over a month ago in a win over the Jacksonville Jaguars.

“I think that Deshaun is such a competitor,” said Texans interim head coach Romeo Crennel. “He always wants to bounce back if and when he has bad days.”

Those bad days have seemed to come a lot this 2020 NFL season. Houston currently sits at 2-7 in the AFC South and with the way their divisional foes (Tennessee and Indianapolis) have been playing this season, it puts their chances of winning their third consecutive Divisional Championship in jeopardy.

Despite their record, Watson still continues to do all he can on the field to get the Texans back on track.

“Go to work, put our heads down, grind, just keep working hard and play each game to the last seconds,” Watson said about his team’s attitude after a very tough loss to the Cleveland Browns this past Sunday by a score of 10-7. “There is nothing that you really can change. If we were sitting with a better record, I would be saying the same thing. Keep my head held high. Keep working. Keep trying to encourage and stay as healthy as possible. Nothing is going to change, at least on my end.

“Every loss is frustrating. Regardless of how it is, every loss is frustrating. You have to take it on the chin and go back to the drawing board and just try to get ready for the Patriots next week. That is all we can do is keep looking forward, learn from the mistakes, learn from the missed opportunities and try to get back to the basics and get to the details of New England and try to focus on that one. It is tough to lose, especially in this league.”

With the Patriots coming into Houston this week, riding the momentum of defeating the Baltimore Ravens this past Sunday, it will be left up to Watson to keep former MVP Cam Newton on the sidelines where he can’t do a lot of damage in the running game against a Texans defense still looking to gain their identity in stopping the run.

It will also be left up to New England’s future Hall of Fame head coach Bill Belichick’s job to stop one of the most potent quarterbacks in the game who is known around the league for being able to buy time in the pocket to give his wide receivers an opportunity to make plays.

“He really creates more problems when he extends plays and gives these receivers a chance to get open,” said Belichick. “When he can buy time in the pocket and the receivers have a little extra half a second or second to get open, then that’s going to result in some big explosive plays, too. So, the combination of all of it really makes him very difficult to defend.”