"Dark Was the Night: Blind Willie Johnson's Journey to the Stars" by Gary Golio, illustrated by E.B. Lewis 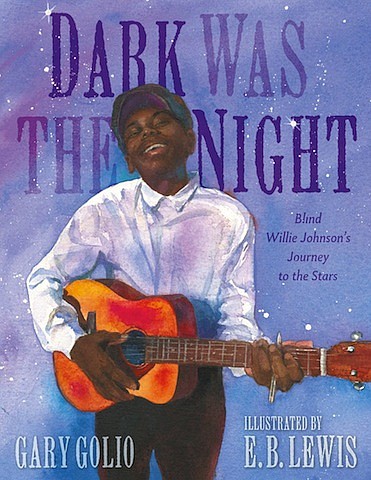 It's almost time for lights out.

Just before that, though, you have a ritual: you wash your face, brush your teeth, put on your jammies, crawl into bed, and get a bedtime story. Then it's lights out until morning but before your good-night kiss tonight, ask for one last thing. Ask for "Dark Was the Night" by Gary Golio, illustrated by E. B. Lewis.

In a tiny Texas town in 1897, little Willie Johnson was born on a bright, sunny January day.

Willie's family didn't have much money, and so when he was a small boy and his parents noticed how Willie loved to sing, his father made a guitar for him from a cigar box and a wooden board. The boy would strum and sing all day long, and that's how Willie Johnson learned to play the guitar.

But then "some light went out of [his] life..." His Mama died, and not long after that, when Willie was "seven or eight," he went blind.

So Willie couldn't see, but that didn't stop his voice, did it? No, he could still sing in church and at home, and "on street corners." He could still strum his guitar – a real one now, one that could sound like it was "laughing or crying" – and he played his audiences "the way a preacher would."

And that's what he did: he traveled by train, into towns where cotton farmers gathered on Saturday mornings, and he'd sing raspy and powerful, making his guitar laugh and cry and people would put a few coins in a cup so that Willie Johnson had something for supper and a place to lay his head for another night. He played and played until one day, a man came to hear Willie sing, and the man offered to make a new thing called phonograph records and pretty soon, everybody knew the name of Willie Johnson. He was "a shining star."

That was true almost a hundred years ago. And it's still true today...

For the older child who hears this story at bedtime – and "Dark Was the Night" makes an excellent bedtime tale, by the way – there may be some question. How can a century-old story still be relevant?

The answer lies in author Gary Golio's afternotes. There, he explains that when NASA sent Voyager I into space some forty years ago, included was a time capsule of audio clips, and Johnson's song with the same title as this book.

Nice to know, but your child is likely to care much more about Johnson's life story, which is inspirational and shows the strength of will and talent, despite adversity. There's also magic in this book, which comes in E.B. Lewis' washed-watercolor illustrations: alone, they tell a wordless tale that appears as sad, elated, or determined, all of which are perfect for children who are pagers more than readers.

Older preschoolers may enjoy this book, but starwatchers up to age 8 will love it best. Find it – then sneak "Dark Was the Night" in before lights out.