A Change Was Necessary 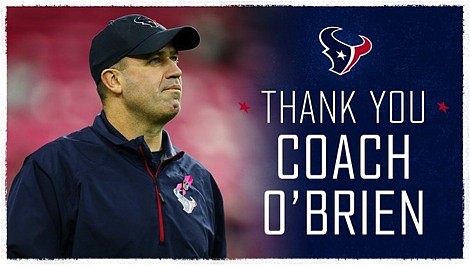 Sometimes change is necessary. Although it’s the one thing that scares a lot of individuals, the results of it can pay huge dividends. The Houston Texans are hoping that the latter is accurate.

The team fired their head coach and general manager Bill O’ Brien on Monday after the team’s horrendous 0-4 start this season. Associate head coach Romeo Crennel will serve as the interim head coach for the remainder of the season.

“Bill’s leadership moved our organization forward as he guided us to four AFC South division championships, 52 wins and multiple playoff appearances during his tenure, said Texans chairman and CEO Cal McNair in a statement released to the public. “Bill proved himself as a coach and leader in this league. I spoke with him earlier today and told him we are moving forward in a different direction.”

O’Brien came to the Texans in 2014 after spending two years at Penn State repairing the football teams’ image after the child sex scandal. The McNair family hired him with the hopes of him changing the mindset of the team coming off of a 2-14 season that led to the firing of head coach Gary Kubiak. O’ Brien showed promise in his first season improving the win total by seven games going 9-7 and almost lead Houston to the playoffs. He finished 52-48 in seven seasons winning four AFC South division titles.

One of O’Brien’s biggest failures was never getting any of his teams to the AFC Championship Game. Houston came close twice in his career. After winning the division and a Wild Card Playoff Game in 2016, the Texans advanced to the AFC Divisional round but ended up losing to his former team New England Patriots. Three years later Houston took the same route, but this game would be the beginning of the end for O’Brien.

After going up 24-0 on the Kansas City Chiefs, it all fell apart as the eventual Super Bowl Champions scored 42 straight points and defeat the Texans 51-31. That was one of the most disappointing losses in franchise history.

"We couldn't get it over the hump last year, the year before, and obviously early on this year, but it wasn't from lack of effort," said O’Brien who was given the general manager role this past offseason. "We did win four division championships here that we're very proud of; won four division championships in six years. So, we did a lot of good things here, but we didn't do enough. 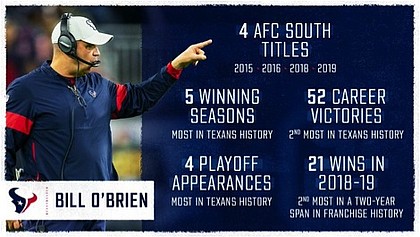 As crushing as the defeat was on the field for fans, O’Brien the GM would disappoint them more by trading away fan favorite and future Hall of Fame wide receiver DeAndre Hopkins to the Arizona Cardinals for running back David Johnson and a second-round pick in the 2020 NFL Draft.

“I think that every decision we made was always in the best interest of the team,” O’Brien said when asked about some of the decisions he made regarding personnel. “We had long conversations. We put a lot of research into them. There were things that happened within the walls of an organization that the outside public will really never know and that’s just the way it is.