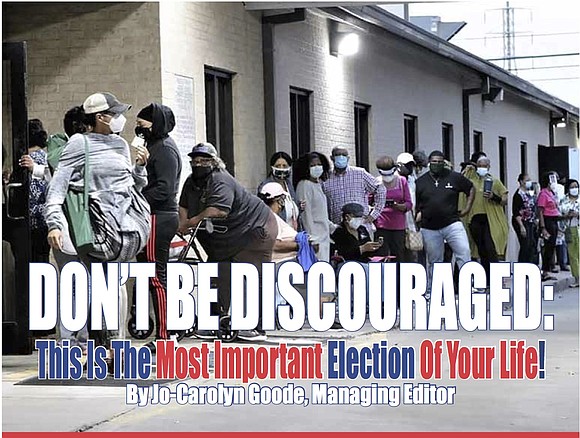 For months now we have heard how this would not be an ordinary election. Beyond the candidates and the issues, the hot topic has been how we would vote and be safe at the same time. All across the nation, there have been court hearings, lawsuits, protests, and marches with people interpreting laws to favor their side to either take away or add more voting restrictions all to discourage minorities from voting. Harris County Clerk Chris Hollins most notably has had a battle with Governor Greg Abbott over the distribution of mail-in ballot applications. Let us also not forget Gov. Abbott’s order to have only one drop off location for mail-in ballots for a county composed of over 4 million people. With each hurdle we kept pushing forward, lifting our voice to not be ignored, and keeping our eye ever so focus on the goal ahead – voting. We were disappointed but we didn’t drop out. We were derailed but no less determined. We were disgusted but still driven to our goal, demanding of our purpose, and dedicated to our cause to cast our vote in this most important election. Houston Style Magazine applauds every one of you who has done their part to participate in the solution to help the problems that plague our nation. For those who have yet to perform your civic duty Houston Style Magazine has a special message for you – Don’t be discouraged.

In the 1800s, there was a lot to be discouraged about. African Americans were thought of as less than human thereby had no rights whatsoever. Then there was the age where African Americans were denied the right to vote for not passing ridiculous literacy tests, jellybeans tests, poll taxes residential property restrictions, and more. Nevertheless, we had those who had a don’t stop, don’t quick attitude who would not rest. Their efforts resulted in the passage of the Voting Rights Act of 1965 that finally granted minorities the right to vote. President George Bush reauthorized the act in 2006 thereby making it easier for minorities to register to vote. Each time we take a step forward there are others in the background trying their hardest to make us take two steps forward. We must be like our ancestors of yesteryear by not being discouraged but more determined than ever to cast our vote.

Elected officials help determine how we all live. They are only given that power when we vote or not vote. Everyone must realize by not voting you are still voting because it is a vote for the other side. Every vote counts. Every vote matters. As I often hear in a commercial, if the right to vote wasn’t so important why would people want to take your right away? Anything worth having is worth saving. There are far few things as important as the right to vote. Politicians know this. And you should as well. We are their employer and we have the right to show them the door or open it for them if they don’t keep our best interests at heart.

Right now we are all CEOs of the company known as America. We are accepting applications for the various open positions and evaluating skill sets, track records, decisiveness as we determine whom we will hire. Your vote is your top candidate. The one who will make decisions on your behalf that aligns best with your family’s values, needs, and beliefs. You must choose the best applicant possible by November 3rd. Who will you choose?

Hopefully, you choose people who will represent all of America with no regard to their gender, race, economic status, title, sexual orientation, or religion. The person you choose should be worthy of representing you.

Early voting has started in Texas and ends Friday, October 30, 2020, and Election Day is Tuesday, November 3, 2020. Harris County has 120 voting locations, 8-24 hour voting locations, 10 drive-thru voting locations, and 1 spot to drop off mail-in ballots. If you are going to the polls, remember your ID. You are not required to wear a mask but it would sure be a great gesture to protect yourself and others. For more information, visit HarrisVotes.com.

And remember, don’t be discouraged!