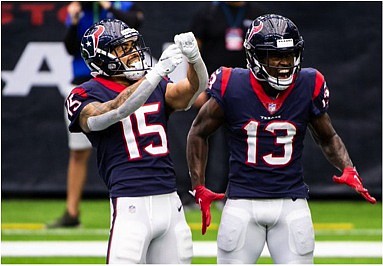 The attendance on Sunday wasn’t the usual 70,000-plus screaming fans that normally fill the stands at the Texans home games at NRG Stadium, but none of the 12,413 fans that were in attendance didn’t leave until the team cleared the field cheering them all the way to the tunnel. The hometown team finally gave the fans something to cheer about after they won their first game of the 2020 NFL season defeating the Jacksonville Jaguars by a score of 30-14.

It was the first game for the Texans after the firing of former head coach and general manager, Bill O’Brien earlier in the week.

“The win was huge,” said interim head coach Romeo Crennel, who will serve in that position for the remainder of the season. “You know, particularly the way that we started the season, not winning a game out of four, and then being able to come here at home and play a tough game.”

Quarterback Deshaun Watson led a Texans offense that had a season high 486 net yards as he threw for 359 yards with three touchdowns and two interceptions. It was the second consecutive week that he has thrown for 300 yards or better.

Making big-time plays is what Houston had in mind when they traded with the Los Angeles Rams for wide receiver Brandin Cooks. After not getting a lot of passes thrown his way a week prior, Watson found Cooks eight times for 161 yards and a touchdown on Sunday.

“The ball happened to come my way,” said Cooks after the game about his performance. “Everyone was making plays today, and when you have that, it seemed like everything just goes well for everyone.”

If fans were excited to see what the offensive side of the ball was doing, they must have been super elated to see their defensive unit led by J.J. Watt, Whitney Mercilus, and Zach Cunningham. The defense forced two fumbles in the game that halted the momentum by the Jacksonville offense. It was the first time this season that the defense has caused a turnover.

“That's a big thing we've been focused on is just getting the ball, because you can't win if you're losing the turnover battle every game,” said defensive back Bradley Roby. “If your offense has the ball more than the other team, then you're going to win most likely. That was a big focus this week is that we wanted to get our first takeaways and we got two today.”

After the victory, Crennel entertained his team by showing off some of his dance moves as he made his way into the locker room. According to Roby he didn’t know which direction his coach was going in as far as dancing was concerned but was happy to see the fun return to the locker room.

“Man, he did like five dances,” Roby said. “He did the Soulja Boy, he did the Macarena, he started doing the disco. I didn't know what he was doing. It was funny though.”