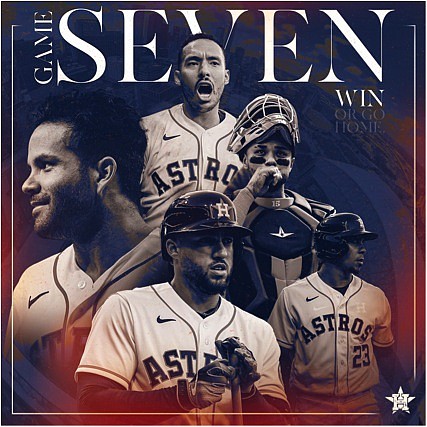 Hip Hop Artist Chris Brown had one of the most iconic openings to a song that has been etched into the minds of everyone who has ever heard it. On his hit single, “Look At Me Know” featuring Busta Rhymes and Lil Wayne, Chris bellows out what could easily be the Houston Astros rally cry this season to other teams and fans who are holding the 2017 cheating scandal over their heads.

You can't even get in

On Friday afternoon the Astros made all the naysayers hold their harsh words and social media posts for just one more day as they forced a Game 7 in the ALCS by defeating the Tampa Bay Rays by a score of 7-4 at Petco Park. After falling behind 3-0 in the best-of-seven series, the Astros became the second team in MLB history to force a Game 7.

The only other team to do so was the 2004 Boston Red Sox who came back and defeated the New York Yankees in the ALCS.

“We’re relentless,” said Astros shortstop Carlos Correa who had another good game at the plate going 3-for-5. “When we said we didn’t want to go home, we really meant that. We want to keep playing baseball and we don’t want this to be the end of our season. We took care of these three games and now we’ve got to take care of one more. If we don’t win that game, it all means nothing. We have to go out there tomorrow and get that win. It would be great.”

Houston used a monstrous fifth inning to blow the game open against the Rays. After trailing by one run, catcher Martin Maldonado laid down a perfect bunt to move runners Yuli Gurriel and Aledmys Diaz. That would set up leadoff hitter George Springer who drove in both base runners with a single to right field. Jose Altuve followed that with a double down the left-field line to bring Springer home and Correa’s single would allow Altuve to cross home plate to put the Astros up 4-1.

They added another run when rising star Kyle Tucker took Rays reliever Shane McClanahan deep to left-center field in the top of the sixth inning. Houston was not done as they came back the next inning and put two more runs on the board to push the lead to 7-1.

Tampa closed the gap with one run in the seventh and two in the bottom of the eighth off of the Astros middle relievers, but closer Ryan Pressly sealed the victory with a scoreless ninth inning.

“They battled back, they didn’t quit at all,” said Astros manager Dusty Baker. “And they're not gonna. I'm just grateful, and thankful to be in this position to have a Game 7.”

One reason the Astros are even playing on Saturday evening is because of the tremendous pitching performance by starter Framber Valdez who went six innings, striking out nine Rays batters giving up one run on three hits.

His day was going drama free until the bottom of the sixth inning when Tampa Bay’s first baseman Yandy Diaz came to the plate with one out and a runner on base. Diaz drew one of the three walks Valdez had, but seemed to take exception with the expressions of Valdez after ball four was called. Diaz continued to bark at Valdez as he walked towards first base until Correa made his way over from his shortstop position to defuse the situation.

As Valdez headed back to the mound Correa followed him to give him some words of encouragement and to help him refocus on the task at hand.

Valdez responded by getting Brandon Lowe to hit into a double play to end the inning.

Now the Astros will try to complete the epic comeback by sending their ace Lance McCullers Jr. to the mound to start Game 7.

“We have the right guy,” said catcher Martin Maldonado. “He’s been there before, pitching Game 7 of the World Series. I just feel we’re going to take this game like we have been taking every game, one pitch at a time. As long as we keep executing pitches, keep playing defense like we are, we’re going to be in good shape.”