How Young and Black Voters Can Flip Election 2020 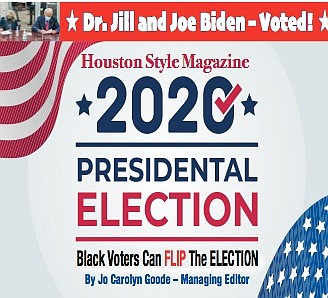 Previously, politicians have led them to believe that they were invisible in the eyes of the government and therefore widely ignored these two groups. Feelings of abandonment led to these groups showing a lack of interest in the issues of the day. The dawn of the 2000s began to see a shift within these groups as they begin to show greater interest in politics than before. The interest drew them to become involved in politics. After all, one must have a seat at the table to play the game.

No greater surge has happened to turn the tide in voting for these groups than the era of pre-Barack Obama. Flipping the way a campaign is done, Obama’s team not only targeted these groups but they did in the way they specifically communicated using technology and social media. Thereby, not waiting for voters to come to him but he went to them where they were.

In 1971, 18-year-olds were granted the right to vote with the passage of the 26th amendment when the voting age was lowered from 21 years of age. It was believed if 18-year-olds were old enough to fight in the war then they were old enough to vote. The expanded age voting pool meant candidates needed a way to grab the attention of the young voter who often was not in tune with the political arena.

However, the lowering of the voting age did not change how political leaders campaigned. A different method was needed to capture their attention.

Traditional means of campaigning by using phone call banks and going door-to-door did not and does not work when trying to get the younger vote. Those campaign methods are dinosaur-like techniques in the age of technology. To get the attention of the young voter one must meet them where they are and that would be online.

Going online to use social media and other tech problems was one of the key components to Obama’s successful campaign run. He was popping up on YouTube. Sliding into their social media feeds. Messaging them in texts. After the initial contact, those young voters became a part of his official campaign staff. When they received the message from Obama’s team they would share it with their friends thereby helping Obama’s messages go everywhere. This communication also helped young voters to understand how issues affected them and their future and how they could get involved in the political process.

However, getting their attention and holding it became a problem. Many would register to vote but got lost on the follow through to show up at the polls. For example, in 2016, 28 million in 43 states between the ages of 18-29 registered to vote but only 19 million voted. Those numbers can view some success since that was an increase in comparison to Baby Boomers and Gen-Zers when they were 18-29.

Politicians have to submerge themselves in technology and social platforms to get their messages across as well as to find out what is important to youth. They want to know about the economy to make sure it has a good outlook of them being employed and making a great salary after graduation. Healthcare is a concern due to a lot of them being dropped from their parents’ health coverage. By far the most pressing issue on the rise is racial inequality as they have seen first hand how people are disregarded simply for their skin color, religious background, or sexual preference.

Election 2020 is showing even more promise for the younger voter. Voting is up to everyone across the country.

Blacks have a difficult history with voting. Coming over to America against their will in slave ships, Black people weren’t even considered human but thought of as property. In response, Black people began to fight to gain freedom and a voice.

Black people slowly became to be seen as humans with rights in the eyes of the constitution and law. Other means were taken to suppress the Black voter with literacy tests and such to be able to vote. In their place came voter ID laws and the threat of losing the right to vote. Black voters have fought to keep their right to vote for decades. With a people, so determined one would think politicians would make a valiant effort to engage with Black voters who have thought of themselves as unheard, unseen, and misunderstood.

Historically Black voters have a low turnout. The main reason for this is because they didn’t believe politicians represented them or that their vote counted. In Texas, for example, Black voters accounted for 15% of early voters in 2016 compared to now when Black voters account for 13% of the vote.

Black Americans came out in droves to support Obama. Never had they imagined an America with a Black man as President of the United States. Post-Obama the numbers dwindled. Then came the Trump era with Donald Trump being one of the worst presidents America has had. His lack of empathy shocked them. His representation on the global stage embarrassed them. Nothing engaged them more than his stance on racism in America.

Problems of injustice were once just a “Black” issue. Now became an America problem as more and more groups of people acknowledge and even have apologized for the years that this country tried to sweep racism under the rug. The constant murder of Black men and women being recorded and play on the airwaves has allowed all voters, not just Black voters, to realize the real way to handle this issue is to put people in office who care about the issue and can push for changes in the law.

All over this nation, states are seeing record numbers at the polls. Americans have been so frustrated in the way the country is being run that they are making sure to send a clear message to the White House. Leading the charge are young voters and Black Americans who want a true, real change in America. They can’t affect change by themselves. It will take each one of us. If you haven’t voted early be sure to vote for a better America on November 3rd. See ya at the