America's Greatest Athletes Are Standing Up, Calling This Country to Change

The greatest athletes in America are standing up for justice at a critical time. Despite unprecedented, multiracial demonstrations across the country protesting police violence against African Americans, the horrors keep on coming. Last week, Jacob Blake was shot seven times in the back by a policeman in Kenosha, Wisconsin. As the anger has grown, some of the protests have been marred by vandalism and looting. Now armed right-wing militia groups are escalating the tensions. In Kenosha, two demonstrators were murdered and one wounded by a 17-year-old Trump supporter illegally wielding an assault weapon.

It is into this cauldron that the professional basketball players of the NBA stood up, forcing a suspension of the playoffs, to support the call for justice. Their example was picked up by others - the WNBA, baseball players, tennis champions like Naomi Osaka and more.

This takes courage. Great athletes are taught to focus on their sport and to ignore their power in the culture. Owners, agents, managers and fans see them as entertainment, not as citizens or leaders.

Yet the very God-given gifts, discipline and skills that make a great athlete contribute to their capacity for leadership. In the Old Testament, little David honed his skill with a sling. When an oppressive horde led by a giant named Goliath threatened the Hebrew people, David stepped up, hurling the stone that slew the giant and saved his people.

When LeBron James, Dwayne Wade, Chris Bosh and the Miami Heat players stood up in response to the death of Trayvon Martin, Americans across the country took notice. The same is true now as the current athletes focus on Breonna Taylor, George Floyd, Jacob Blake and the others they name. They know the risks, but they also know that when they leave the court or playing field and return to their families, they are just another black person to the police, and must worry about how to protect their sons and daughters, sisters and brothers, or even themselves. Both Sterling Brown of the Milwaukee Bucks and Thabo Sefolosha of the Houston Rockets were victims of police lawlessness. 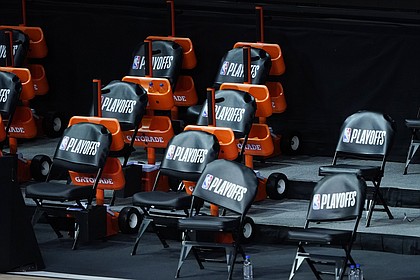 Here the example and leadership of LeBron James has been critical. Athletes across the world look up to him. When LeBron uses his platform to speak out - even in the face of insults from the president and others - he sets a tone and an example for others. In my opinion, he uses his gifts and platform so responsibly because it is his way of thanking God by serving others.

Dr. Martin Luther King Jr. used his gifts and platform to change the culture. Today, athletes are using their commitment to call this country to its senses.

Great athletes have often been pacesetters. When Heavyweight Champion Jack Johnson stood up to racially biased and arbitrary social mores, he impacted the culture. When Joe Lewis defeated Max Schmeling, he pummeled the entire Nazi theory and racist ideology. When Jesse Owens became the world's fastest man at the Berlin Olympics, Adolf Hitler wouldn't shake his hand, but when Owens came home, he told me President Roosevelt wouldn't shake his hand either. Jackie Robinson broke the racial barrier in baseball and bore the physical and psychological scars from doing it.

At the height of his career, Muhammad Ali, became a conscientious objector to the Vietnam War, and paid the price of years stolen from his career. Every athlete should be grateful to Curt Flood for ending the reserve clause and gaining athletes the right to free agency to negotiate the best deal they could. Colin Kaepernick launched his nonviolent campaign against police killing of black people four years ago that has cost him his career.

The athletes had to stop business as usual to gain attention. They have been in intense meetings figuring out how they can most be effective. They understand that the murders can't go on; the system must change. They are calling on others to join them. They are putting their time and their resources on the line. They've now convinced NBA owners to turn their arenas into polling places where people might vote safely. Their actions have already had effect. It is too easy for cynical politicians and entrenched interests to turn attention from the injustice to the excesses that mar those protesting it. The players have forced our attention back to the injustice and to the core demand that Black Lives Matter. For that, they deserve our respect and our support.