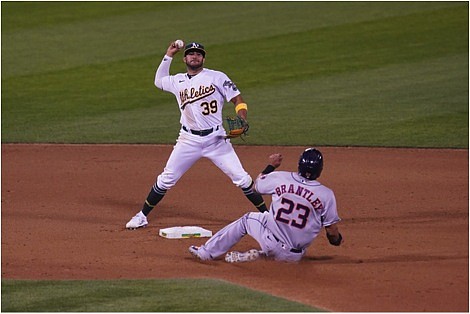 In a short 60-game season, multiple game losing streaks sticks out like a sore thumb. For the Houston Astros, a team that has been plagued by multiple injuries this season, they have picked the worst possible time to standout as they are in the midst of a five-game losing streak. Their woes continued on Monday night as they dropped another game back in the standings by losing to the A.L. West division leaders Oakland A’s. Houston (21-20) lost to Oakland (24-14) by a score of 6-0 in Oakland. That brings the Astros road record to 5-14 away from Minute Maid Park.

Manager Dusty Baker knows the grind and toll this series is going to have on his team playing five games in four days coming off of a series where they played the Los Angeles Angels three games in four days. Still he has faith in his team knowing that they can pull through this adversity, but not scoring runs on Monday night really does not sit well with him.

“We're facing better pitching, some of the best pitching in the league,” Baker said. “You hate to get shut out. I hate shutouts because that means you don't have a chance to even win 1-0."

Two huge factors went into the Astros going scoreless against the A’s on Monday night. One was the effective and efficient pitching performance by Oakland’s starting pitcher Chris Bassitt (3-2). He pitched seven scoreless innings only giving up seven scattered hits to go along with four strikeouts. His performance helped erase his last meeting with the Astros where he gave up four earned runs and two homers in a start in late August at Minute Maid Park.

"I just had every pitch kind of working," Bassitt said in his postgame press conference. “We wanted to start this series hot, which we did,”

The second factor that caused Houston to drop its fifth straight game was their inefficiency to bring home runners off the base path. Seven runners were left on base in the game and the Astros went 0-for-3 with runners in scoring position in a 2-0 game heading into the seventh inning. That has been an issue Houston has tried to work on this road trip but has come up short in their last 3 losses. They have gone 3-for15 with RISP and stranded 16 runners on base. Those numbers have to improve if the Astros are looking to make a run at their fourth consecutive A.L. West title.

With under 20 games left in the season Houston also finds itself looking over its shoulder at the Seattle Mariners who are making a run at the second spot which is currently held by the Astros. The Mariners are on a six-game winning streak and still has over 10 games to play against Houston and Oakland this season. Yet Dusty Baker takes everything in stride knowing what his own club is capable of doing.

“Somebody might be catching you and trying to overtake you, but we can’t look behind us,” said Baker. “You can’t be afraid of somebody overtaking you from behind.”