A Legend in The Making

The great debate on who is the G.O.A.T (Greatest of All Time) when it comes to the NBA players usually comes down to two of the best to have ever set foot on the hardwood. Retired Hall of Fame shooting guard for the Chicago Bulls Michael Jordan or future first ballot Hall of Fame forward LeBron James who currently plays for the Los Angeles Lakers. Sports fans go back and forth with different stats, attributes, and characteristics on who is the best and depending on the day, the top spot changes consistently.

Both Jordan and James have made a significant impact on the game of basketball as we currently know it with their abilities to outthink their opponents and lead their teams to victory. What if I told you that there is an NFL quarterback that has been compared to both of those great athletes due to his play on the field in college and the pros all within a three-year time frame?

Would you believe me?

Well there is one player that resides in the city of Houston that currently holds the position of signal caller for the Houston Texans. Deshaun Watson or shall we call him either “LeBron Watson” or “Deshaun Jordan?” It really doesn’t matter because his coaches, teammates, and colleagues around the league believe he has all the tools and traits to be a combination of both.

The Houston Texans showed how much they believe in him when they awarded him a new four-year contract this offseason worth $156 million that secures him through the 2025 season. The new extension makes him the second-highest paid player in NFL history behind his in-conference quarterback rival Patrick Mahomes of the Kansas City Chiefs.

It all started after Watson’s successful college career when he led the Clemson Tigers to consecutive appearances in the College Football Playoffs National Championship Game where his team finally won it all against Alabama in 2017 after coming up short one year prior to the Crimson Tide. During that game the Tigers trailed 31-28 with 2:07 remaining in the game before Watson put together a 68-yard drive that ended with a two-yard touchdown pass to wide receiver Hunter Renfrow to secure the victory by a score of 35-31. 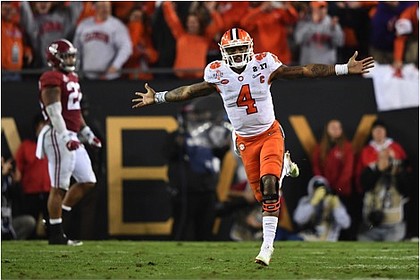 After the game Watson shared what his exact words was to his teammates before that game-winning drive.

Little did he know that his college head coach Dabo Sweeney would echo his legendary sentiments as Watson prepared for the 2017 NFL Draft. Sweeny made a very bold proclamation at the 2017 Senior Bowl that had some sports analyst looking at him to make sure he had all his wits about him when he made the statement that if the Cleveland Browns, who had the first overall pick in the draft passed on Watson they would be passing on the equivalent of Michael Jordan.

He would later double down on that statement at the Tigers Pro Day.

“Some of the media folks got mad at me because I said if you pass on him, you’re passing on Michael Jordan,” Sweeny said to the media. “But I don’t know how to articulate the type of greatness that’s inside of him. And for me that’s what Michael Jordan represents because that’s what I grew up with.

“I’m sure when Michael Jordan was coming out of North Carolina his 3-pointer wasn’t very good. And he probably had some flaws, whatever, when you start poking holes on him,” Swinney added. “But it’s who he was, that will, that drive. You can’t coach that and that’s what I want to make sure I articulate. This guy is brilliant between the ears and he’s special in his heart.” 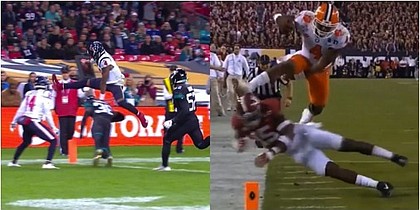 Those overall attributes led to the Houston Texans trading up 13 spots in the first round from 25 to 12 to make Watson the face of their franchise. All he did after that was win two AFC South titles while also making two appearances in the Pro Bowl and become one of the best quarterbacks in the NFL.

Some of you all are too young to have watched Michael Jordan during his glory years with the Bulls. If we are being honest, Watson probably has to watch the games via YouTube himself since he is was only three years old when Jordan won his sixth NBA Championship.

One player that the Texans quarterback is familiar with is superstar LeBron James, having watched him dominate the league since 2003. Watson witnessed all the championships in Miami and the ever-impressive way he won in Cleveland bringing the city its first ever NBA title. The resiliency and fervor that James brings to the court is the same tenacity that Watson brings to the field every Sunday.

His outstanding play week in and week out led the Baltimore Ravens defensive coordinator to compare him to James as they prepare to play the Texans this Sunday at NRG Stadium in Houston.

“He, to me, is like a LeBron James-type player in the NFL instead of the NBA,” Martindale said to the media during his weekly press conference. “He’s a general, he’s a point guard out there, and we all respect his game.”

That is very high praise coming from a person that gets to watch the 2019 NFL MVP everyday in Ravens quarterback Lamar Jackson.

Houston hopes that their leader can help avenge a 41-7 regular season loss in Week 11 to Baltimore. Watson had one of his worst performances of the season by throwing for 169 yards and no touchdowns while being sacked six times and turning over the ball twice (interception and fumble). Yet he does not dwell on the past and took the loss as a learning experience.

“This is a new year, so we’re not really focused on what happened in that game,” Watson said. “It got away. They did their job and did what they had to do at home.”

If the Texans superstar can stay on the current pace he is on, maybe one day he will be able to hoist the Lombardi Trophy in the air during a Super Bowl victory celebration the way Michael Jordan and LeBron James have with the Larry O’Brien.