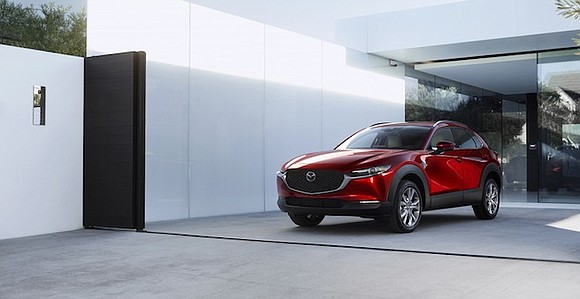 The 2020 Mazda CX-30 is the second model to adopt the latest evolution of Kodo design. It is a more mature interpretation of the striking design ethos.

The CX-30 is meant to evoke creativity in one’s life. Realizing two contrasting expressions, the compact crossover has the flowing beauty of a coupe and the bold proportions of an SUV.

Mazda’s signature wing grille takes on a sharper and deeper form to achieve a strong, refined front end that is suggestive of forward motion. The diagonal angle of the rear window gives the vehicle a coupe-like silhouette while the narrowed arch shape of the liftgate makes the body look shorter and wider for a powerful stance.

This allows for purposeful design of the hatch that maintains its usefulness without giving the CX-30 a box-like appearance. That’s what Mazda said. But our eyes tell a similar albeit a little different story.

The CX-30 is a compact crossover. It seemed a little squarer than most Mazdas. But designers rounded the roof and that restored its sleekness. We didn’t appreciate its compactness until standing beside it and found ourselves head and shoulders taller than the CX-30.

The interior was clean. Designers were able to rid the dash of a center stack or a control area. The floating infotainment screen was atop the dash which had a smooth curve in its middle running from top to bottom. It looked like it was standing up in a depression.

Climate controls were in the center of the set up but on the bottom side of the curve. It really did look like a sonorous piece of long flowing leather.

The instruments were a triad with the speedometer in the middle, the odometer on the left and fuel gauge and temperature gauge on the right. And they were a mixture of analogue and digital, with the latter being used for the speedometer.

We climbed into the back seat and found the area a little close but comfortable. Only in a crunch could three people ride abreast in the back seat. Still, there was plenty of head room for backseat passengers.

That cabin was quiet, the CX-30 had a sturdy feel on the road. It accelerated briskly and handled well. There was no noise, harshness, or vibration.

About the only thing we found to complain about was the audio system which required at least three steps to change radio stations. That’s too many and ride long enough and the system reverts to default settings and you must do it all over again if you want to change stations again. However, ownership breeds familiarity and you can pre-set familiar stations.

Under the hood was a 2.5-liter four-cylinder engine that made 186 horsepower and a matching 186 pound-feet of torque. It was mated to a six-speed automatic transmission with a sport mode.

This combination got 25 mpg in the city, 32 mpg on the highway and 27 mpg combined.

There were 18-inch alloy wheels all round and LED lights across the spectrum. This Mazda CX-30 had all-wheel-drive.

The brand is introducing Mazda Connected Services as a standard feature on all CX-30 models. It can be accessed by logging into the My Mazda app, it includes the ability to lock or unlock the doors, remote start the engine or activate the hazard lights.

It had a power driver’ seat with lumbar support and the front seats were heated. The test vehicle had Android Auto, Apple CarPlay, satellite radio, pushbutton lock and unlock as well as keyless entry.