Astros Control Their Own Destiny 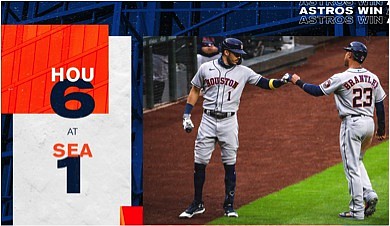 “Controlling your own destiny,” is a phrase the Houston Astros have heard over the last three weeks day in and day out. Of course, it is a cliché that could be used at the start of every season, but it doesn’t mean as much when you still have over four months of baseball left during a normal season compared to a 60-game global pandemic one.

On Tuesday night, Houston (28-27) used a five-run sixth inning to break a 1-1 tie against the Seattle Mariners (24-31) to win 6-1 in a “Must Win” game for the Astros if they want to reach their goal of making the playoffs for the fifth straight year. Houston’s magic number is down to two games to secure that spot.

“It’s fun when you get some hits,” Astros manager Dusty Baker said.

Fun is a word that had been missing from the Astros vocabulary this year. With the plethora of injuries they have suffered throughout the year losing players in the lineup due to small nagging injuries, some players unable to start the season on time due to COVID-19 related issues and having superstars Justin Verlander, Roberto Osuna and Yordan Alvarez gone for the year, Houston is looking for anyways to make Astros baseball fun again.

Veteran catcher Martin Maldonado controlled the Mariners from both sides of the plate by blasting a three-run shot over the left field wall to help cap off the five-run inning for Houston which was the most runs they have scored in an inning since Sept. 12th against the Dodgers. He also called a brilliant game for pitcher Framber Valdez (5-3) who pitched seven innings allowing only one run while striking out eight Mariners.

Maldonado knows that the Astros have what it takes to make a repeat trip to the World Series this year. He rejoined the team last season in a trade that sent utility player Tony Kemp to the Cubs and brought him back for his second stint with the club.

“After we get there (playoffs), we know what we have to do to win games,” said Maldonado. “This team has done it for the past three years. It’s a matter of getting the at-bats together and the pitches together. We know how to win games, especially when the playoffs start.”

The veteran catcher wasn’t the only one who had a great night in T-Mobile park in Seattle. Left-hand hitter Kyle Tucker torched the Mariners pitchers for four-hits in five at-bats. After going 1-for-22 over a six-game stretch earlier this month, Tucker has rebounded with a 12-for-29 performance at the plate in the last eight games. His four hits on Tuesday was his second four hit game on the season with the first coming in Colorado in August.

Houston plays the last game of the series today before heading to Arlington to face the Texas Rangers to close out the 2020 MLB regular season.