Supreme Court Justice Ruth Bader Ginsburg -- the Notorious RBG -- was a tenacious advocate for equality. The outpouring of grief across the nation is testament to her commitment. She deserves to be honored and celebrated. The assertion of Donald Trump and Mitch McConnell that they will rush to nominate a justice intent on dismantling her legacy is both shameless and poisonous. Shameless because it exposes once more that they care only about power, not about the law or legitimacy. Poisonous because it uses the death of a justice famed for consensus-building to deepen the nation's toxic divisions.

Ruth Bader Ginsburg is often compared to Thurgood Marshall. Marshall, as head of the NAACP Legal Defense Fund, created the legal strategy that slowly, case by case, led the Supreme Court to declare unanimously that segregation was a violation of the Constitution, that discrimination on the basis of race was unconstitutional. Ginsburg, as head of the Women's Rights Project at the ACLU, devised a similar strategy to educate the justices about the reality of sexual discrimination, leading the Court to find that discrimination on the basis of sex was unconstitutional.

Both were tenacious advocates; both were devoted to the law and respectful of it. Both understood that their legal strategy was successful because of broader social movements. As Justice Ginsburg wrote, "Judges do read newspapers and are affected, not by the weather of the day ... but by the climate of the era."

Both also understood a fundamental truth. Equal justice for African Americans benefits all Americans, not just African Americans. Racism scarred the lives of blacks, but of whites also. Similarly, equal rights under the law for women and men benefits both. Equal pay for women helps support families. One of Ginsburg's pathbreaking cases argued against the law that gave women survivor's benefits under Social Security but deprived men of them. They understood that we all benefit when we all can fulfill our potential.

Justice Ginsburg called herself a "judicial restraint liberal." She believed that in a healthy democracy, the judicial branch should work in partnership with the other branches, rather than seek to impose the views of its majority on the society.

Trump and Republican Senate leader Mitch McConnell know no such restraint. Trump sits in the White House, despite earning far fewer popular votes than his opponent. McConnell leads a small majority in the Senate that represents far fewer citizens than the minority. Driven by partisan electoral concerns, they now say they will seek to nominate and confirm a right-wing justice to take Ginsburg's seat, one holding views they know are opposed by a majority of Americans. Like a wolf in sheep's clothing, these justices pretend to be "strict constructionists," when in fact they are right-wing activists, willing to overturn judicial precedent and legislative intent to impose their views.

One target, of course, is Roe v. Wade, the Supreme Court's 1973 decision establishing the constitutional right to abortion. At risk also is the Affordable Care Act, the legislation that extends Medicaid to millions more working people, allows young people to be covered by their parents' health care, mandates protection of pre-existing conditions, subsidizes health care for those without employer plans, and reduces the cost of prescription drugs for seniors. Trump's Justice Department has joined with right-wing Republican attorney generals in various states in a lawsuit to have the Court declare the law unconstitutional. At risk too are civil rights laws -- affirmative action, the Voting Rights Act -- already weakened by conservative justices and still under assault.

Ginsburg, like Marshall, believed in the law, respected its process, cared about its precedents. The new right-wing activist judges have no such restraint. They were willing -- in a 5-4 decision -- to gut the Voting Rights Act that had just been reauthorized by vast majorities of both houses of Congress. They are willing to repeal the ACA, also passed by Congress and deprive millions of health care. They are eager to erode a women's right to choose, something that Judge Ginsburg recognized was "central to a woman's life, to her dignity. This is a decision no government should make for her. 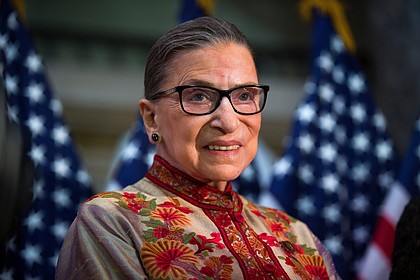 Trump believes that by nominating the right-wing zealot he can consolidate the support of his right-wing base. McConnell believes that by ramrodding the nomination through -- despite the impending election -- he can help threatened Republican senators up for election in conservative-leaning states. For short-term political advantage, they are prepared to entrench minority views in a majority of the Supreme Court.

This nation -- and Justice Ginsburg -- deserve better. Americans must make certain that Trump and the senators understand that this outrage will cost them politically, not help them. Let Americans vote before choosing to fill Ginsburg's seat. Let Americans decide if they want to entrench a reactionary majority on the Court. Surely, as we grieve the loss of this extraordinary historic justice, that is the least we can do.