Astros get help from a friendly foe to secure final A.L. playoff spot. 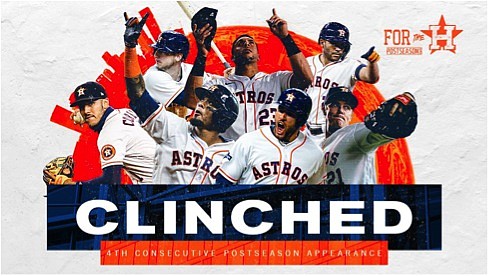 As a young man my grandmother always taught me to do everything on my own and never depend on anyone to do anything for me.

“Handle your own business son. People will never be able to do what you need to be done like you,” Big Momma said.

Houston had their business handled against the Texas Rangers at Globe Life Field on Friday before it turned around on them in the bottom of the ninth inning and they would eventually lose the game on a Joey Gallo fielder’s-choice to lose the game 5-4.

That loss prevented Houston from wrapping up the final playoff spot in the American League as they awaited the outcome of the Los Angeles Angels versus Los Angeles Dodgers game that wrapped up a couple of hours after the Astros. The Dodgers used some late inning runs to defeat the Angels 9-5 and now the 2020 American League Playoffs has all their teams accounted for. Houston secured the sixth spot by finishing second in the A.L. West and must now wait to see where they will be traveling to play the No. 3 seed.

The Astros were very close to being able to celebrate in their own clubhouse on Friday night. With a one run lead and two outs, reliever Ryan Pressly gave up a solo homerun to Ronald Guzman with two strikes to tie the game to tie the game at four apiece. Jose Altuve would give the Astros a one-run lead in the top of the 10th inning, but the Rangers scored two runs off of relievers Enoli Paredes and Brooks Raley in the bottom of the inning to win the game. Houston is now 2-7 in extra- inning games this season.

“It was a great 2-2 pitch and I don’t even think he got all of it,” said Pressly who gave up his fourth blown save in 16 outings. “You have to tip your hat to him because he just went down and got it. It’s frustrating obviously. Your team goes out there and gives you a chance to win and you come in and get beat on a pitch like that it’s frustrating.”

Alex Bregman had another good night for Houston as he hit a solo homerun in the top of the sixth inning to tie the score at 2. It was the first time this season he has hit homers in back-to-back games. First baseman Yuli Gurriel broke the tie in the top of the eighth inning with an RBI single which was his first since Sept. 12 against the Dodgers.

Astros manager Dusty Baker can now execute his plan on resting a couple of his star players with the Astros securing their fourth consecutive trip to the postseason. Baker also reached a huge milestone himself by becoming the first manager in MLB history to take five different ballclubs to the playoffs.