Astros finally catch a break to defeat the Twins in Game 1 of the A.L. Wildcard Series 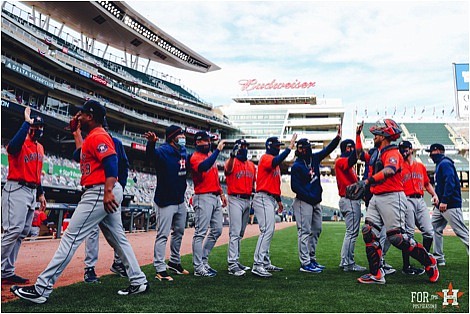 Astros manager Dusty Baker always reminds his team of a simple saying that he has used throughout his playing days and his time spent as a manager in the big leagues.

“In order to be lucky you have to think lucky.”

Lady luck was on Houston’s side on Tuesday afternoon as they defeated the Minnesota Twins by a score of 4-1 to take Game 1 in the best-of-three A.L. Wildcard Series. Jose Altuve drew a walk with the bases loaded off of reliever Sergio Romo in the top of the ninth inning to give Houston a 2-1 lead. His plate appearance may not have happened if it had not been for a little luck.

With two-outs and two men on base, Twins shortstop Jorge Polanco fielded a George Springer ground ball and made an errant throw to second base that pulled Luis Arraez away from the bag to eliminate the force out that would have ended the inning. That brought Altuve to the plate with the bases loaded. He has not been having the best year in the batter’s box as he finished the season with a .219 batting average which is far below the over .300 he has hit in the last five out of seven seasons.

“I was looking for my pitch and it wasn’t it, so I decided to take it,” said Jose Altuve after the game.

Outfielder Michael Brantley drove in two more runs when he singled to right-center field to put the Astros up by three runs and that would eventually be enough to secure the victory at Target Field. It was only the 10th road win for Houston this season and it was also the 17th consecutive playoff loss for Minnesota dating back to Oct. 5, 2004.

“It was nice to get a couple extra runs on the board,” Brantley said about his hit in the ninth inning. “Any time you get a big hit and get some runs on the board it is only going to help the morale.”

The All-Star left fielder wasn’t the only one helping restore the confidence of an Astros team that came into the playoffs with a losing record at 29-31. Left-hand pitcher Framber Valdez relieved starter Zack Greinke in the top of the fifth inning and pitched five scoreless innings allowing two hits while striking out five batters. The regular season starter who appeared in 11 games for the Astros became the first relief pitcher to throw five scoreless innings in a playoff game since San Francisco Giants pitcher Madison Bumgarner in Game 7 of the 2014 World Series. 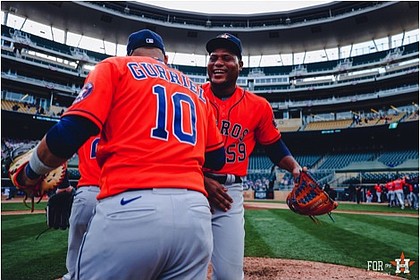 Valdez, 26, was placed in the bullpen during this three-game series to do exactly what he did on Tuesday by being available if Greinke got into any trouble. After getting out of a bases loaded jam in the first inning and then surrendering a run in the bottom of the third on a Nelson Cruz RBI double that drove in Max Kepler who had drew a walk with two-outs, Baker relieved Greinke and replaced him with Valdez.

“I knew what the plan was coming in, and that’s why I was prepared, and I was ready to go,” said Valdez who at one point in the game retired 13 batters in a row. “I started getting ready around the third or fourth inning with the pitch count Greinke was at. I was prepared to come in and be successful as a reliever, and that’s what I did today.”

Now it is on to Game 2 for the Astros who will secure a spot in the 2020 ALCS in Los Angeles, California if they are able to get another victory on Wednesday. First pitch is at 12pm CST on ESPN 2.