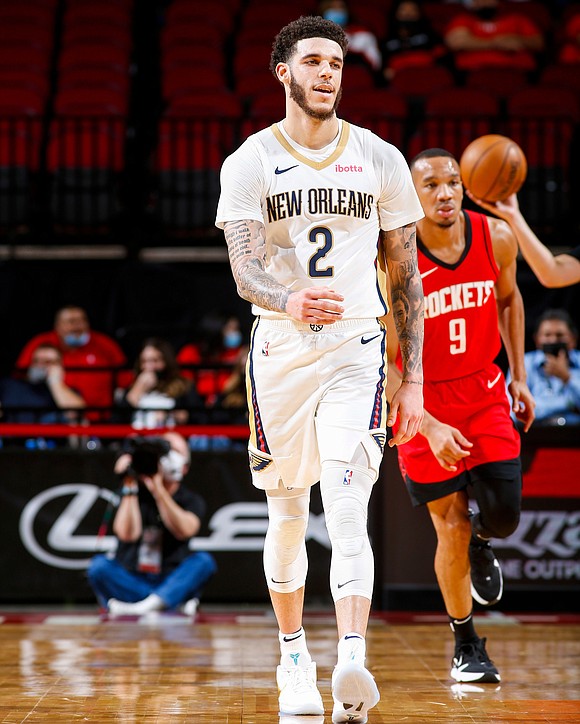 The shorthanded New Orleans Pelicans used a very efficient game from Lonzo Ball to defeat the Houston Rockets 122-115 on Sunday at the Toyota Center in Houston. Ball, who had been out of the lineup since mid-March with a hip flexor strain, scored 27 points and had nine assists while hitting a career-high eight shots from three-point range.

''What Lonzo has done over the past two years to improve his shooting is one of the best stories in the league,'' said New Orleans Head Coach Stan Van Gundy.

The former UCLA superstar got the Pelicans going early as he connected on four out of the six three-pointers he attempted in the first half to give New Orleans a 70-59 advantage going into the half.

Houston would fight back in the third quarter using a 33-19 advantage led by forward Jae’Sean Tate’s 11 points and a stellar defense that held the Pelicans to just six made shots in the period that gave the Rockets a 92-89 lead heading into the final period. The lead increased to 102-97 with just under eight minutes left to play before New Orleans went on a 10-2 run to put them up for good and secured the win.

''We have to learn it's about winning in the fourth quarter,” said Rockets Head Coach Stephen Silas on his team’s late game collapse. “Up and down with the emotions, we can't let that distract us when we're trying to win a game in the fourth.''

Kelly Olynyk led Houston in scoring with 26 points, followed by Jae’Sean Tate with 19 points and Christian Wood finished with 15 points and 12 rebounds. Olynyk, who was traded to the Rockets from the Miami Heat for Victor Oladipo is making his presence felt in Coach Silas’s system averaging 18.2 points per game in the five games he has played in.

“I am starting to feel everything out and let it come to me,” Olynyk responded when asked about how he excels in the Rockets offense. “The way I have always played basketball is to take what the defense gives you.”

Houston will not have time to fix the mistakes made on Sunday night as they will be back in action on Monday against the Phoenix Suns who have the second-best overall record in the NBA and who is currently on a five-game winning streak.