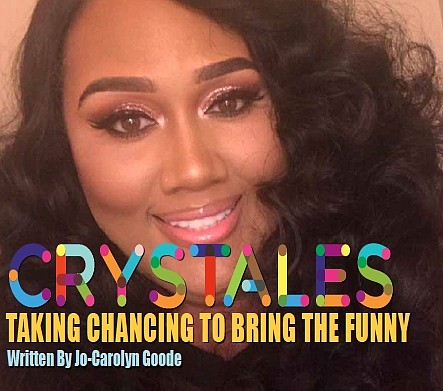 How amazing would it be if you could see yourself the way God sees you? This became a repetitious prayer for Crystal Holmes-Montgomery. When she couldn't see herself as God did it made her view narrow and not able to the full picture. For the longest time it seemed God had been sending her a message to add another dimension to herself. Crystal has a gift to make others laugh. Not just a, "girl you funny," kind of laughter but a fall out your chair, split your pants, and pee a little kind of funny. She has been like that all of her life and is often told that she missed her calling to be a comedian. Despite the nudge of God and the validation from others, Crystal has never given the idea any serious thought until now. Crystal aka CrysTales is finally taking chancing to bring the funny.

God really showed His sense of humor to Crystal one night while out with friends. She and her crew had just attended the James Harden Women's Brunch when Crystal gets introduced to entrepreneur, actress, and stand up comedian B Simone. With the introduction Crystal's friend added, "I don't vouch for many people but the girl is funny as hell." Upon that recommendation B.Simone turns to Crystal to offer her a chance of a lifetime to be the opening act for her upcoming show at the Baltimore Comedy Factory in Baltimore, Maryland. Say what now? Crystal thought no way was B. Simone serious and kind of laughed it off. Only B. Simone was not joking. She had four shows and wanted Crystal to do a ten minute opening act set without having ever heard Crystal tell one joke or see her perform. God was telling Crystal, "My child I see bigger things for you."

"When you write the blueprint for your life," Crystal wrote in Facebook post, "make sure to include the curves and detours." Being a comedian was not on her radar at all. The Houston native is a Prairie View A&M graduate with a background in biology. After graduation, she studied the beauty industry and earned her cosmetology license with a specialty in eyebrows. The entrepreneur mastered her skillet, developed her own product - ARCHnointed Brow Serum, opened a luxury salon, and grew her fan base. The ilashalot empire was on fire. Right as she was coasting the curve of comedy hit.

"Exceed your own expectations right outside of your comfort level. This is where the magic happens," Crystal wrote on her Facebook wall.

Like a wave of a wand with the magic word "abracadabra," Crystal had her first professional comedy gig for not just one show but four shows over two days. She might not have taken full advantage of the opportunity if it were not for two of the most important people in her life that are always watching. Daily Crystal preaches to her two sons, Carson and Cullen, to go after whatever their minds can imagine so how could she preach that to them and not walk the walk herself? She couldn't.

"I don't think I am a comedian. I think that I am funny. I have funny situations that happen in my life." Crystal continued, "I don't intend to make people laugh. I am not telling jokes really. I am just telling stories about my life and people laugh about it."

Crystal spoke with Houston Style just a few weeks before her comedic debut. She had yet to figure out a plan for her show. Although she knows she didn't want to make it too structure or seemed rehearsed. Being her authentic self and telling her real life stories is what makes her funny and others laugh. Stepping always to settle her thoughts were her boys. The eldest advised his mom to not try to be a comedian but to just be her. His advice was followed with daily affirmations of encouragement that she could do this and the warning to not talk about him in her show. While the youngest knew gave her a composition notebook that he called her new "funny book" for her to write out her thoughts and jokes. He also requested to not be the subject of her show. The gestures of love were just what Crystal needed.

She took the stage in Baltimore and they weren't ready. She killed it! Over the next few months God continued to show Crystal that bigger picture He saw blowing her mind along the way as she went from that initial show to being a book and busy comedian. She began rubbing elbows with others in the industry when she got the ultimate stamp of approval from comedy star Earthquake when he officially welcomed her into the comedy dome.

"I am humble, grateful and ready to take this comedy to the next level," said Crystal.

The next level for Crystal is her first comedy tour happening this month. Under her new minted management company and stage name, ijokealot comedy for one night only presents CrysTales "Miss ijokealot" on the first stop of her debut tour on December 30, 2021 in Jasper, Texas with DJ Hollywood.

"I am giving the people what they want and I hope y'all come and see your girl in rare form." Crystal laughed as she joked, "I need all the free laughs I can get." (I can vouch for her too. She will have you cracking up.)

Keep up with comedy career of CrysTales aka "Miss ijokealot" on her IG page @ijokealotcomedy.

May her life inspire you to see yourself as God does and take more chances in life.