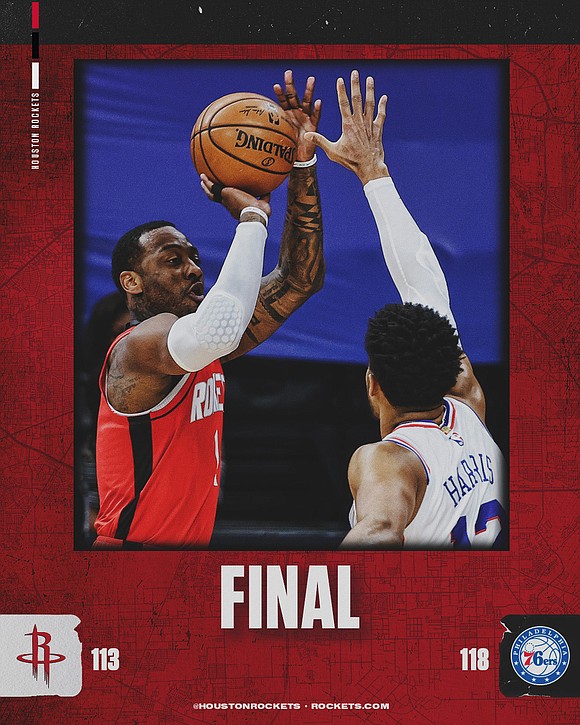 I am a firm believer that most individuals believe that there are no such things as moral victories in professional sports. Many have the mindset like the majority of the athletes that only wins, and losses are the only thing that shows up in the standings.

But. If there was an additional column added to wins and losses abbreviated as “M.V” for moral victories, the Houston Rockets would lead the NBA.

On Wednesday night, the Rockets (11-17) lost their seventh straight game in a row to the Philadelphia 76ers (19-10) by a score of 118-113. That win snapped a three-game losing streak for the 76ers who sit atop of the Eastern Conference.

Houston was once again without three starters in Christian Wood, Victor Oladipo, and PJ Tucker due to injuries. It seems like that has become a recurring theme for the Rockets as they have tried to stay afloat in the first half of this season.

The Rockets began the 2020-21 NBA season with a disgruntled superstar in James Harden and multiple players missing games due to NBA Health and Safety measures involved with COVID-19. As the season has progressed, injuries have taken a huge toll on the players and coaching staff, which has caused some sleepless nights for first-year head coach Stephen Silas.

“My nature is to be positive, number one and to be a problem solver, number two,” said Silas. “So as each player goes down and each challenge arises, it’s just my nature to not make it emotional and try to focus on the problem-solving part of it. I have to do whatever it takes to help them (Players) and solve the problems that come unfortunately for this group on a daily basis.”

A big problem Houston faced during the game was Philadelphia’s superstar center Joel Embiid. He returned to the lineup after sitting out the prior game against the Utah Jazz due to back stiffness and finished the game with 31 points, 11 rebounds and nine assists in the victory. Embiid along with Tobias Harris (24 points) and Seth Curry (25 points) helped the 76ers build a 29-point lead and looked to cruise to their 19th win of the season.

Yet, the resiliency and hustle of the Rockets, led by John Wall’s 26 second half points brought Houston within four points in the fourth quarter, but late scores and free throws helped seal the victory for the 76ers. Jae’Sean Tate and DeMarcus Cousins chipped in 19 points apiece, while Eric Gordon returned to the lineup after missing the previous game with a groin injury to score 17.

Houston now heads home for a three-game homestand, if the weather permits travel for them and their opponents. The state of Texas has been hit hard by a winter storm that has affected many homes and businesses leaving them with no electricity or water for consecutive days.