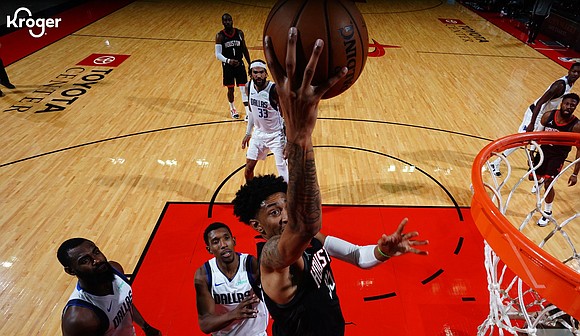 The Houston Rockets game plan was to keep Dallas Mavericks superstar Luka Doncic in check and make the role players beat them. Neither was accomplished as the Mavericks got a triple double (33 points, 16 rebounds, and 11 assists) from Doncic and 30 points from reserve guard Tim Hardaway Jr. as Dallas beat Houston 113-100 in the “Battle of I-45” at the Toyota Center on Tuesday.

Hardaway was pulled from the starting lineup for the first time this season on Tuesday so that his coach could get more size in the lineup against a smaller Rockets lineup. Instead of taking the benching in a negative way, Hardaway responded by shooting 80% (8-for10) from beyond the arc.

"I'm here to help this team out any way I can,” said the son of former NBA All-Star Tim Hardaway Sr. “I just had to make sure I was ready when I got in the game to make an impact."

Houston struggled all night with continuity on the court and even when Rockets head coach Stephen Silas went with a smaller lineup to help get Houston back in the game after the Mavericks continued to build double digit leads throughout the game. The flow of the offense and defense was only good in spurts.

Coach Silas was not happy after the game due to a plethora of isolation sets on the offensive end which was not what he was calling from the sidelines.

“We were way too stagnant,” coach Silas said losing to his former team. “We didn’t move the ball enough to put pressure on their defense. The amount of our five-out possessions was minimal, and it’s got to be fixed.”

James Harden made his return to the court after being scratched from the lineup less than 45 minutes before tip-off against the Sacramento Kings on Saturday. He finished the game with 21 points and 10 assists, but was 3-for-11 from three-point range and only hit a total of five shots in 38 minutes.

Harden wasn’t the only Rockets player who had an off day against the Mavericks. Off-season acquisitions Christian Wood had his double-double (23 points and 7 rebounds) streak broken at four games and John Wall finished with just 14 points hitting four shots in 33 minutes.

“We played hard, we just didn’t make any shots,” Harden said after the game.

Houston was also dealt an early vicious blow to their rotation when reserve center DeMarcus Cousins was ejected three minutes into the second quarter after receiving two technical fouls.

After going 2-1 in their mini three-game homestand, the Rockets head out on the road to play the Indiana Pacers on Wednesday night and then return home for another three-game stretch that includes the 2020 NBA Champions Los Angeles Lakers.