A Reason to Fight for the Right to Vote 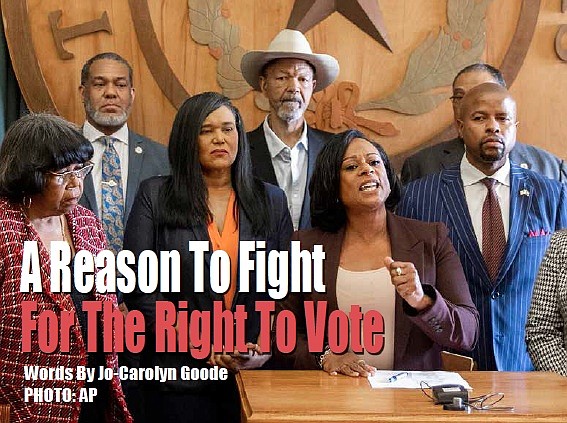 We should not still be fighting for something that is granted to all Americans by the U. S. Constitution. Every person with breath in their body has a voice that deserves to be heard. They should not have to be on guard to protect this most precious right. America is a melting pot of different cultures, races, beliefs, and so many things that make each person unique. Why we can't use that which makes us different and unique to work in unison and in harmony to make this country the best there is. Working together always results in a greater reward for the betterment of all. But still today 232 years after the first presidential election, people are still attacking the right to vote and others are standing strong protecting their right to vote.

This was not the America Joe Biden wanted to see when he came into office. Right after he was declared the winner, Biden started trying to smooth the tide between Democrats and Republicans.

In his first speech as President-Elect, Biden said, “I understand your disappointment tonight. I’ve lost a couple of elections myself." He continued, "Let’s give each other a chance.”

I guess that was but a dream. It seems the Republicans had a mindset to vote no on every legislative action the Democrats drummed up. One of their main focuses has been to change the way voting is done in Texas.

Voter suppression has been at the forefront of the agenda for lawmakers with Republicans wanting to make major changes in voter access in their GOP voting bill Senate Bill 7.

Houstonians will remember the campaign Harris County did to make sure every voter had access to vote from the 24-hour polling locations to the mailing of voter applications to all eligible voters. There were more polling locations than ever before including a drive-thru locations. The SB7 would change that by changing the hours at voting locations from the usual 7 a.m.-7 p.m. to 6 a.m.-9 p.m. and it will be based on a population of 30,000 instead of 100,000. Drive-thru polling locations would be banned as well as other temporary structures for polling places. And the most controversial is how this would bill would target the distribution of polling places in urban communities.

The bill had already passed in the Senate and was up for a vote in the House. However, it could not be voted on because there was no quorum after the Democrats did a dramatic walkout. An hour before the final approval of the bill the Democrats walked out after receiving a text message from Grand Prairie state Rep. Chris Turner telling them to "leave the chamber discreetly."

Of course, Republicans were upset. Lt. Governor Dan Patrick has said that this bill is in the best interest of all Texans. However, the Democrats think differently. Their argument in opposing the bill is because of how it threatened the right to vote for people of color thereby silencing their voice.

That fell on deaf ears as the Republicans were fired up more so than ever with their agenda.

In a tweet, Gov. Greg Abbott said, “Election Integrity & Bail Reform were emergency items for this legislative session. They STILL must pass. They will be added to the special session agenda.” He continued, “Legislators will be expected to have worked out the details when they arrive at the Capitol for the special session.”

Gov. Abbott further threatened to hold lawmakers' pay if Democrats didn't return to do their jobs. In a tweet, Gov. Abbott said he would take lawmakers' pay away by vetoing the section of the state budget that funds their salaries for their hours. Lawmakers get $600 a month and a per diem of $221 for every day they are in session.

Gov. Abbott has the power to veto lawmakers' pay until June 20th.

Whenever there is someone trying to take away your right to vote that will always be a reason to fight to keep that right.