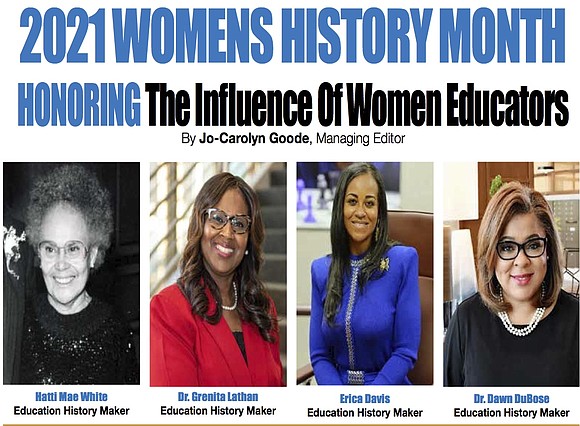 Education has always been of the utmost importance for generations of African Americans. It is something that once obtained can never be taken from. It is the passport to a successful life. Many Americans can thank a woman for having such an influence. There once was a time when it was against the law for African Americans to read and write. Yet, instill, brave souls risked life itself to learn and to teach others like them. For many people, their first teacher was probably their mother. She taught your numbers as she counted your fingers and toes. She did a silly dance while singing the ABC’s. She taught you how to read when she read stories to you after being tucked in the bed. In this way, women have always been natural born teachers. Hence, why their gender dominates the education field. In celebration of Women’s History Month, we spotlight some African American women who have made and continue to make invaluable contributions in the field of education.

One can’t start the telling of Houston’s story of educating children without talking about Hattie Mae White. The former schoolteacher was the first African American elected to public office in Houston and the first African American to serve on the board of the Houston YWCA Metropolitan Board of Directors. She was educated at both Prairie View A&M University and Texas Southern University. She began advocating in civic affairs in the 1950s before running for Houston ISD School Board. When she won her seat she had to endure racism including having a cross burned on her lawn. She was a strong advocate of desegregating schools. White was able to see the initial efforts while still in office. She also saw fit that the district start to accept federal funding and helped the status of black employees. Most importantly is that she advanced the state of African Americans seeking political office in Houston.

Standing on White’s shoulders is Houston ISD interim superintendent Dr. Grenita Lathan. Joining the Houston ISD family in 2015, Dr. Lathan was unanimously voted for the position by the then Houston ISD Board in 2018 making her the first African American woman to serve in this post since the district was established in 1924. Under her leadership, new programs have been introduced for academic success, underperforming schools have moved to better rankings, arts education has expanded, and the district remains in good financial standing. She continues to work on reversing state testing scores and helping students in underserved schools to overcome the odds. It is evident that she has a passion to see children succeed.

Sharing her passion for children’s academic success is newly installed Harris County Board of Education Trustee Position 5 Erica Davis. Installed at the beginning of this year, Davis said she was drawn to the Harris County Board of Education for the services that are provided to families. She knows first hand how beneficial that can be as a child who grew up in the Sunny Side and Acres Homes areas but was educated on the Memorial side of town. The importance of education was taught to her as a way out. Davis took advantage of her way by earning her undergraduate degrees from the University of Houston where she was able to learn Spanish. Being bilingual had always been her desire and then became one of her biggest challenges. On numerous times when Davis spoke in Spanish in various settings for work, the reception she received s a Black woman speaking Spanish was icy cold.

Understanding how to work together is crucial for Dr. Dawn DuBose in her line of work as the Chief of Schools for Stafford Municipal School District. She best helps students succeed by making sure that the adults who are teaching students are well equipped with the tools and resources need- ed. Teachers have been thrown a real curve trying to teach students in person and virtually so Dr. DuBose offers a lot o professional development workshops on subjects like classroom management and keeping students engaged for teachers. Making a difference in the lives of children is something that Dr. DuBose has pledged her life to do. She knows there is value in changing the trajectory of a child’s life through education and is aware that things she does today to reach children will have to be constantly refined as she works on all the needed platforms that students need to learn.