So Close, Yet So Far Away 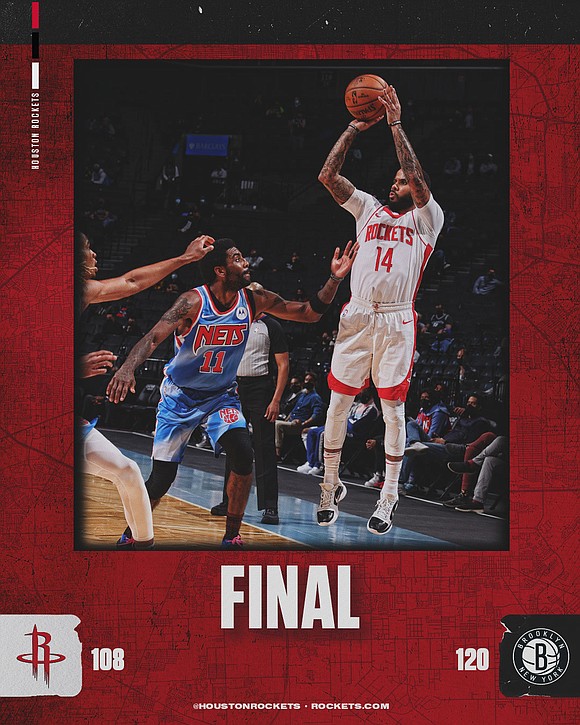 Hard work and dedication are key components to success for most individuals. Where a lot of people fail is when they get frustrated with amount of work each component requires that yield no results. Most times than not, you are on the cusp of breaking through and can see it right in front of you. It is so close that you feel like you can touch it, but it’s just out of your grasp.

For the Houston Rockets, it seems as if their arms are too short to grab consistent victories this season. They dropped another game on Wednesday night losing to the Brooklyn Nets by a score of 120-108 after being up by as much as 18-points at one point during the game.

"We were tied together for 40 minutes of the game and that last eight minutes or so we just, I wouldn't necessarily say let go of the rope, but we weren't as tight and in the fourth quarter that's when you become even closer and more tied together," said Head Coach Stephen Silas after the game.

The Rockets opened up an early 24-6 lead in the first quarter against the Nets who have the best record in the East and ended the quarter with a 42-29 lead shooting 79% (15-for-19) from the field led by Danuel House Jr’s 12 points.

Brooklyn would ease their way back into the game over the next three quarters by slowly cutting the deficit down and took complete control of the game in the fourth quarter with a 12-0 run to put them up for good. Nets guard Kyrie Irving led all scorers with 31 points and chipped in 12 assists.

“We are going to get every team’s best shot, so that is something we have come to accept,” said Irving about the hot start by Houston in the first half.

One thing that the Nets can’t accept is another injury to a star player. Brooklyn lost point guard James Harden with right hamstring tightness in the third quarter, and he did not return to the game. It is a major cause for concern as the Nets have been without forward Kevin Durant since mid-February with a similar injury.

Wednesday’s game was another learning lesson for the Rockets as they seen the type of potential they have once they are able to get some sort of continuity amongst each other. Trades and injuries have led to a league-leading 32 different lineups for Houston. Not having familiarity amongst each other leads to lapse during the game where the ball just can’t seem to find the basket.

''Fourth quarter we kind of get stagnant and if I'm going to be that franchise guy, that leader that I know I can be, I have to lead my team in the fourth,'' said Rockets center Christian Wood who returned to the lineup after missing two games due to illness. ''I have to be better.''

Houston will be back in action on Friday against the Boston Celtics.