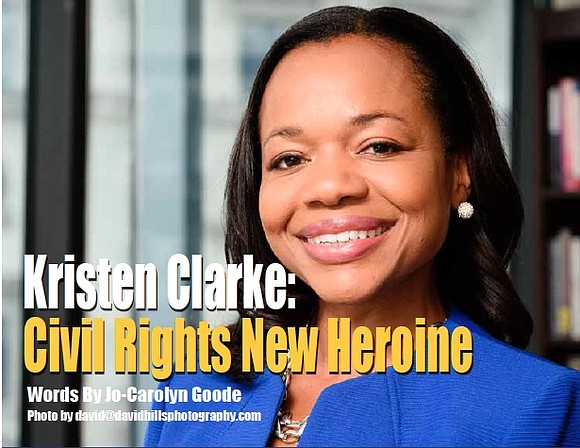 If ever one's life was predestined to make a change in the world, it is that of Kristen Clarke. Before she even graduated high school, she challenged the universe to envision "a world with more justice, greater equity, and equal access." She is now in the best position to evoke clarity to that vision. The history maker just became the first African American woman to lead the Department of Justice's Civil Rights Division as Assistant General Attorney since its formation in 1957.

"Our nation is a healthier place when we respect the rights of all communities. In every role I've held, I have worked for and with people of all backgrounds -- regardless of race, national origin, religion and disability status," Clarke said.

Her eyes have always been keen in seeking to right the wrong of the injustices of the world. Starting with her early days as a trial attorney in the United States Department of Justice Civil Rights Division working to combat voting rights, hate crimes, and human trafficking to her full circle moment leading the division on the national stage. A career full of many successes and loses and, of course, controversy. She became a headline maker as a Harvard University undergrad when she invited anti-Semite Tony Martin to speak at a Black Student's Association event. In the Harvard student newspaper Clake was quoted saying Martin's views were based on "indisputable fact." Her name would once again appear in black and white for a letter she wrote in The Harvard Crimson where she noted neuroscientist Carol Barnes for saying the melanin in Blacks' skin gave the race of people superior physical and mental abilities. These exploits in Clarke's past where just some of the controversial points that skeptical senators harped on during her confirmation hearings.

Clarke responded by apologizing calling the infractions an error in judgment. Clarke also had to address her views on calling Donald Trump's judiciary picks white male extremists, hot topic Twitter tweets, and whether she supported defunding the police to the Senate Judiciary Committee.

"I do not support defunding the police," she said. "I do support finding strategies to ensure that law enforcement can carry out their jobs more safely and effectively and channeling resources to emotional health treatment and other severely under resourced areas."

Clarke has said that she is one to listen to all sides of a debate before making a decision. In her view, "there is no substitute to listening and learning." She continued, "I pledge to you that I will bring that to the role if confirmed.”

With only one Republican to vote in her favor, Kristen Clarke was confirmed to the position Assistant Attorney General for Civil Rights by a vote of 51 to 48. Quite a milestone to achieve on the one-year anniversary of George Floyd's death, a Black man whose life was taken by the hands of a white Minneapolis police officer.

President Joe Biden was among the first to offer Clarke congratulations on her new position. "Congratulations to Kristen Clarke on making history — there’s no one better to lead the Justice Department's Civil Rights Division. I know she’ll work tirelessly to advance civil rights and push our nation closer to our founding ideals of liberty, justice, and equality for all," President Biden said via Twitter.

Vice President Kamala Harris was the first to officially congratulate Clarke after she administered the oath of office to her. "Kristen Clarke has spent her career fighting for equal justice and protecting Americans’ civil and voting rights. As the Assistant Attorney General for Civil Rights, she will continue that fight as we see a rise in voter suppression and hate crimes across the country," Vice President Harris tweeted.

"This is a historic moment because for the first time since its creation, following the enactment of the Civil Rights Act of 1957, the confirmed Assistant Attorney General for Civil Rights will be a woman, and will be a black woman, and that is Kristen Clarke," Vice President Harris spokesperson Symone Sanders.

Attorney General Merrick Garland is happy to have Clarke on board as well. Before her confirmation, he said he needs her skill set and experience to be a successful Attorney General. He wants to investigate police departments' operations and practices around the country that violate the civil rights of Americans. He wants to offer grants to their practices and relationships with the community. This is something Clarke wholeheartedly supports.

All were not praising Clarke's confirmation.

"This is not the right nominee for a crucial post at a crucial time," Senator Mitch McConnell said.

"Kristen Clarke's brazen disdain for law enforcement -- evidenced by her repeated calls to defund the police and her troubling history of advocacy on behalf of brutal cop killers -- should be disqualifying to serve as Assistant Attorney General for the Civil Rights Division," Senator Ted Cruz said in a statement to CNN.

Many who did applaud the nomination said the negative feedback all boiled to Clarke's race.

"I think it's race, there is no other way to describe it," Derrick Johnson, the president of the NAACP, told CNN. "No one else is being treated the way they are being treated in this moment," Johnson added. "When you compare that to the appointments that the former administration presented, and how under qualified they were for the positions especially for lifetime appointments to the federal bench, you can't draw any other conclusion but [that] it is racially motivated."

Attorney General Merrick Garland is happy to have Clarke on board. Before her confirmation, he said he needs her skill set and experience to be a successful Attorney General. He wants to investigate police departments' operations and practices around the country that violate the civil rights of Americans. He wants to offer grants to their practices and relationships with the community. This is something Clarke wholeheartedly supports.

"I do not support defunding the police," she said. "I do support finding strategies to ensure that law enforcement can carry out their jobs more safely and effectively and channeling resources to emotional health treatment and other severely under resourced areas."