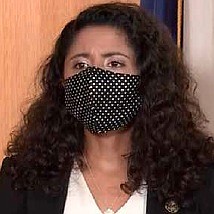 A contract to help increase COVID-19 vaccination has been canceled by Harris County Judge Lina Hidalgo over controversy brought on by Republican commissioners.

County Commissioners Jack Cagle and Tom Ramsey think something does not smell right in the Commissioners' Court regarding a contract of a company to canvas neighborhoods, many for communities of color, with door-to-door campaign to increase citizen vaccination. They believe the company in question was hired as a way to target voters to vote democratically for the next election. Judge Hidalgo said that was not the case.

"I have no personal interest nor political interest in any of this," said Judge Hidalgo in a past meeting of the court.

The company in question is Elevated Strategies, a woman owned marketing firm, who initially proposed a $19.3 million dollar contract for the desire purpose of getting people vaxxed. Commissioners Cagle and Ramsey are confused as to why the company was awarded the contract since in their opinion the company was least qualified and more expensive than the top scorer.

Vendors were invited to submitted proposals and make presentations to win the contract. A five-member committee consisting of two health officials and three others from Judge Hidalgo’s office evaluated the proposal and declared a winner. Four vendors submitted bids for the job and Elevated Strategies and the University of Texas Health Science Center had the two highest scores. Republicans commissioners said that they didn't understand the selection of the winner for the contract since they were $11.8 million more than the top scorer UTHS and the least experience. The committee stands by their recommendation saying that they also reviewed performance rendered and UTHS was behind with current contracts with the city.

Judge Hidalgo has said that her office did not do anything improper. Still the same Commissioners are calling foul and a Republican smear campaign. They have said that Judge Hidalgo is misappropriating money and should resign.

"Gosh, if they’re going to that level of allegation, seriously, at some point it’s a conspiracy theory," said Judge Hidalgo.

After the winner was confirmed, negotiations happened with Felicity Pereyra, owner of Elevated Strategies to lower costs to $11.8 million.

The Houston Chronicle reported Cagle said, “You’re going to go knocking on doors, asking people for information, only in some communities and not others. Houston Chronicle reported that the contract covered the hiring of more than 50 canvassers and staff to conduct a door-to-door campaign, social media marketing, and direct mail and text messaging marketing. Even though the contract was approved by a vote of 4-1 in June and Elevate Strategies has already been paid over $500,000, Republican commissioners were still pushing back.

“The way it’s being politicized is getting in the way of getting people vaccinated,” Hidalgo reportedly said.

Judge Hidalgo has since announced that she will cancel the contract with Elevate Strategies.