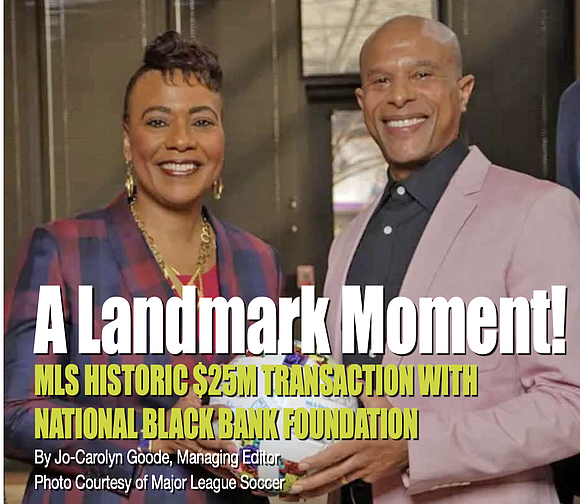 The announcement came this week via Twitter in a tweet that read, “This is a landmark moment – in sports history, in Civil Rights history, in American history.”

MLS will partner with the National Black Bank Foundation (NBBF) to leverage a historic $25 million loan. The move is the first time any sports league has participated in a major commercial transaction exclusively with Black banks.

MLS Commissioner Don Garber said to MLS newsletter, “Major League Soccer’s partnership with the National Black Bank Foundation is a tangible step in the efforts to close the racial economic gap in the United States, and it’s the right business decision for us.”

"There is a commitment from across the organization to create a more diverse, equitable and inclusive league, one that is reflective of who it is that we say we want to be," Sola Winley, MLS' executive vice president and chief diversity, equity and inclusion officer told ESPN.

MLS has been fiercely working on their diversity, equity, and inclusion iniatives to combat racism, advocate for change, and increase the number of African Americans in the sport. For the past 15 years, MLB has constantly updated their policy as they learn how to navigate the issue from talks with Sola Winley, MLS' executive vice president and chief diversity, equity, and inclusion officer; Black Players for Change, an independent organization of more than 170 MLS players, coaches, and staff; and SCORE (Soccer Collective on Racial Equality), a collective of Black former MLS players.

As a result of the partnership that also includes 100 Black Men of America, Inc., and National Coalition of 100 Black Women, the Black community will become more informed about the importance of Black-owned banks and their impact on the economy. The loan will create new lines of credit for home and small business loans. Interests and fees will help the banks’ capital grow.

NBBF co-founder and general counsel Ashley Bell believes that this may cause other leagues and corporations to follow the lead of MLS. Bell said, “In that case, lives of Black families all across this country will change for the better because their local Black bank will have the capital resources to approve historic numbers of home and small business loans.”

The lack of capital has plagued the Black community from climbing out of poverty. Past data indicates how the undeserved borrowers were constantly denied for loans to advance their status in life with home ownership and becoming entrepreneurs.

King added, “This transformative partnership between MLS and Black banks around the country is evidence of what can happen when leaders courageously stand up and decide to participate in equitable change.”

“The players are catalysts,” Bell said. “They risked their reputation and sometimes their jobs to stand up for what they believe in. When you’re a fan like I am and many are, to see players stepping up, you have to rally.”