Preserving the Black Church Is a Job for All Americans 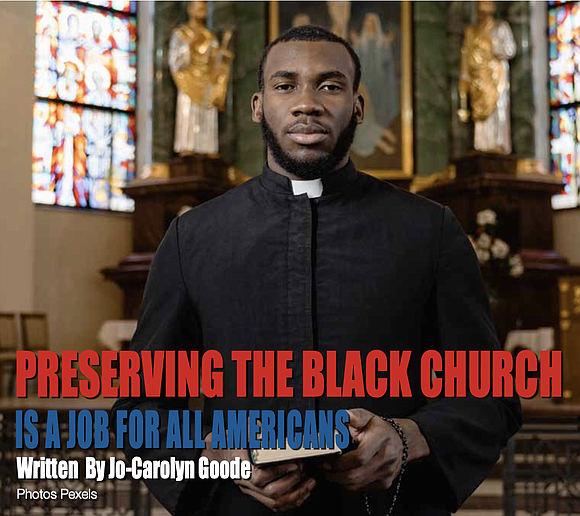 Black churches have a long history of being the central focus of the community. More than a religious institution, Black churches are safe spaces where people can come to seek shelter from a storm, fill their empty belly, educate their children, find employment opportunities, and have their mind, body, and soul blessed. The church is a place where one can come broken and be made whole. These institutions represent so much good it is puzzling why so much bad happens to their structure and people.

In the days of the eighteenth and nineteenth centuries, Black churches became dwellings that Black people could call their own since they were not allowed to worship with white perishers. Since Black people were discriminated against in such harmful ways the church became a gathering place in which they could cast their troubles. In this same manner as the church was a place of refuge for Black people, it became a source of hate for those who disliked Black people.

One of the earliest attacks on record of the Black church happened in 1822 before the American Revolutionary War. About six years after the establishment of Emanuel Metropolitan African Methodist Episcopal Church in Charleston, South Carolina, one of its founders, Denmark Vesey, was accused, tried, and convicted of being the leader of a major slave revolt called “the rising.” The revolt was scheduled for July 14th and Vesey and his cohorts were executed on July 2nd. Following that trial, there would be many other killings and angry white men burning down Mother Emanual, a name the church was often called. After the reestablishment of the AME church, Black churches became outlawed in 1834 causing Black people to meet in secret.

Succeeding that attack was an act terrorism that still to this day is referred as “the single worse incident(s) of racial violence in American history.” Over a two day period in 1921, mobs of enraged white people ruined 35 blocks of an African American community known as the “Black Wall Street.” Tons of property was destroyed including a Greenwood district church that was bombed. The massacre was incited over a black man, Dick Rowland, who was accused of assaulting a white woman, Sarah Page. As rumors circulated of the plan to have Rowland lynched, Black people gathered with weaponry at the jail where Rowland was being held to stop the lynching mob. The sheriff of the jail tried to calm both sides down and encourage them to go home. In the mist of that a white man demanded the pistol of one of the Black men When he refused, a struggle ensued resulting in the Black man shooting the white man and “all hell broke loose” according to the sheriff. Despite the fires, bombing, and destruction, the Vernon AME Church withstood it all and is the only building still standing from the massacre.

Over the years many more Black churches were targeted and destroyed. However, there were several years between 1891-1990, where there was no official damage to churches on record. Things picked back in 1991. In fact, so many Black churches were hit that Congress passed the Church Arson Prevention Act. The bill failed in the Senate in June of 1996 due to some issues in the bill needing improvement. However, it would later pass and then President Bill Clinton signed the act in July 1996. The bill prohibited the damaging of religious properties or obstructing any person’s free exercise of religious beliefs and made these acts a federal criminal code. It changed the statue of limitations from five years to seven and increased the jail sentence of those found guilty of the crime from 10 years to 20. President Clinton took it a step further creating the National Church Arson Task Force to investigate church arsons. It is thought that this task force dramatically decreased the attacks on Black churches. Although that task force was later disbanded, today the Bureau of Alcohol, Tobacco, Firearms, and Explosives investigates attacks on churches.

One of the most historic Black church attacks of this century was that of the killing of nine Black people gathering for Bible Study at the same church mentioned at the beginning of this article, Emanuel African Methodist Episcopal Church in Charleston, South Carolina. A lone white male gunman, Dylan Roof, shot and killed the nine that gathered including the church’s pastor, Clementa C. Pinckney. Saying that “somebody had to do it,” Roof called the killings “minuscule” in comparison to what Black people had done to white people. In preparation for the murders, Roof did extended research of the history of Black churches and identified the one he wanted to target and picked a date and time for one of their gatherings. Roof was charged with 33 federal charges and sentenced to nine consecutive life sentences without parole.

Today, attacks on the Black church are more prevalent to the point that even white churches are targets for anger release. Jewish churches are also highly targeted institutions. Attackers know that when many go to church, they are most relaxed, tend to let their guard down, and often are unarmed. Overtime that has changed as churches have invited armed officers into their houses of praise to protect worshippers and give them a fighting chance to escape bullets with their name on them.

In all instances it is the pure unconditional love of God that kept the Black church alive and well. It is the faith of those who honored and love God that chooses to forgive rather than hate those who persecute against their attackers. The trust in God has allowed them to repair and rebuild the church instead of running away. Attacks that were meant to harm and destroy the Black church have done the opposite by making the church stronger and its members resilient in the face of danger and cause others to offer their help in the fight against them.

This month Black churches received a major blessing. Twenty million dollars has been donated to ¬preserve, rebuild, and tell the storied past of Black churches throughout the country. A huge chunk of the funds came from the Lilly Endowment Inc., a philanthropic organization, who delivered the money to the National Trust for Historic Preservation's African American Cultural Heritage Action Fund. Money was also donated by the

The announcement came on the Martin Luther King, Jr. holiday, an act that is so befitted of the pastor who nonviolently advocated for civil rights and preached the Gospel of Jesus Christ.

“The centerpiece of Black communities starts with the Black church,” Brent Leggs, the executive of the AACHAF, said in an interview with ABC News. “Black churches are exceptionally important in American democracy, not only for their legacy in civil and human rights, but also for their role in uplifting civic identity and community empowerment.”

Black churches’ struggle to keep standing happens for far more reasons than just vicious attacks of violence. The lack of available is high on the list which is why so many Black churches have a constant building fund. Another reason is the threat of natural disasters like hurricanes and most recently, the COVID-19 pandemic. All of these factors and more make it extremely difficult for the Black church to rebuild and operate in normal function. Funding is essential for the Black church.

The first grant recipient of the national preservation project is the St. James AME Church in Kentucky. Receiving $100,000, St. James is slated to repair damages to the church caused by a series of tornadoes that tore through the state and hopes to increase their membership from the 15 who currently belong there.

Rev. Ralph Jordan, pastor of St. James, said in an interview with the Los Angeles Times, “Historically Black churches deserve the same admiration and stewardship as the National Cathedral in Washington or New York’s Trinity Church.”

The program will provide support Black churches staffing and operation’s needs, create an emergency fund, and help develop digital storytelling and documentation policies. The fund has raised $70 million which helped Mother Emanuel AME Church in South Carolina after the white supremacist attack in 2015 and the Bethel Baptist Church in Alabama after the bombing in 1956. The goal of the project is to protect African American history.

So much of Black history is not taught in today’s American schools. If it is mentioned, it is watered down and the rest of it erased all together. America’s past is filled with racism and so is its present. These stories must be preserved and retold not to make others feel uncomfortable, although it should, but it is to capture all America’s history, both the good and ugly. It is to help people of today know what happened in the past to learned from it and not return to that era again. It is to show the journey of the Black people because once one understands where they have been, they can appreciate their present. It is to serve as a sense of joy, pain, sorrow, triumph, and even pride for more than Black people but for all Americans to know that no matter what comes history has proven that Black churches can weather any storm and emerge victorious. Preserving Black churches is job for more than Black people but all people.