Harvey Weinstein's Wife Announces She Is Leaving Him 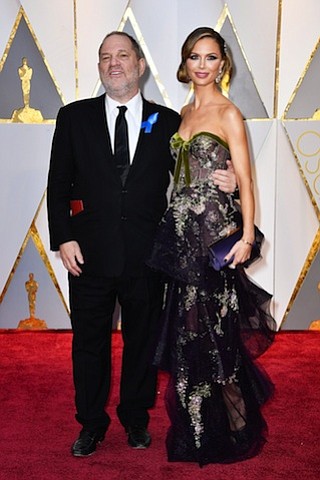 (CNN) -- As allegations of rape, abuse, and other forms of sexual misconduct against him mount, Harvey Weinstein's wife of a decade has announced she's leaving him.

Marchesa designer Georgina Chapman told People magazine in a statement on Tuesday that she was separating from Weinstein with whom she shares two young children.

"My heart breaks for all the women who have suffered tremendous pain because of these unforgivable actions," the statement read. "I have chosen to leave my husband. Caring for my young children is my first priority and I ask the media for privacy at this time."

Chapman has not responded to CNN requests for comment.

The announcement was made hours after an explosive New Yorker magazine story alleged that Weinstein had raped multiple women. The report also included new allegations of harassment and other improper behavior.

A spokeswoman for Weinstein denied the rape allegations in a statement provided to CNN.

"Any allegations of non-consensual sex are unequivocally denied by Mr. Weinstein," the statement read. "Mr. Weinstein has further confirmed that there were never any acts of retaliation against any women for refusing his advances."

Also on Tuesday, actresses Gwyneth Paltrow and Angelina Jolie became the latest women to come forward with accusations of harassment by Weinstein.

The pair alleged that the producer made unwanted advances in the 1990s.

Last week Weinstein talked to the New York Post after the New York Times published an investigation that alleged misconduct by the Hollywood power player over a nearly 30 year period.

Weinstein told the Post at the time that Chapman "stands 100 percent behind me. "

"Georgina and I have talked about this at length," he said. "We went out with Lisa Bloom [an attorney who was advising him at the time] last night when we knew the article was coming out. Georgina will be with Lisa and others kicking my a to be a better human being and to apologize to people for my bad behavior, to say I'm sorry, and to absolutely mean it."

Weinstein's spokeswoman confirmed to CNN Tuesday night that he is heading to rehab.