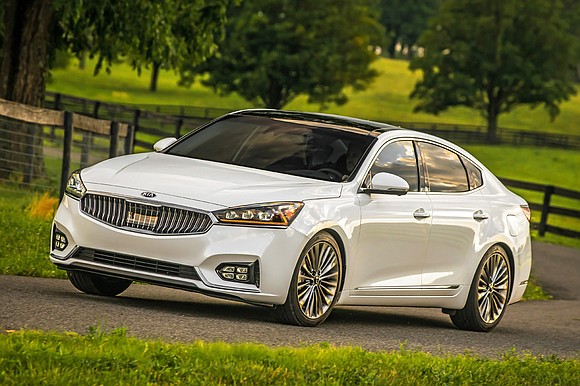 DETROIT – Kia’s Cadenza falls just short of being a full size sedan but it is an all premium car.

For the 2017 model year the Cadenza is stronger, lighter and more ridged, so said the press material. This is the second generation of the premium sedan and Kia has quietly made some important improvements.

This Cadenza had an eight-speed automatic transmission; the first application of the gearbox that Kia has made on a front-wheel-drive sedan. The engine remains a 3.3-liter V6 with direct injection that made 290 horsepower and 253 pound-feet of torque.

The engine has been retuned for better fuel economy and the eight speed transmission is lighter than the six-speed gearbox it replaced. Thus, 2017 Cadenza gets 20 mpg in the city, 28 mpg on the highway and 23 mpg combined.

It had a solid on road presence. We took the Credenza on a stretch of ruddy road that’s as good as any test track for noise, vibration and harshness. For the latter two it did great. We could not feel any vibration and there was no harshness in the ride. What’s more the road noise was held to a minimum.

But there was some noise that came from inside the car. It was more of a squeaking than a noise. It seemed to be coming from the headliner framing. Sometime we could hear it and sometimes we could not.

We’d press the handle above the driver side door and the little squeak would be gone. Sometimes it would not be there, depending on the texture of the road. The point is that it should not have been there at all. We think it was probably exclusive to the test vehicle and not built into every Cadenza that came off the assembly line.

Kia said the Cadenza’s side body panels were stronger because of the increased use of tensile strength steel. They used more adhesives and hot stamped components to increase stiffness too.

Aluminum was used in the front steering knuckles to reduce weight and larger bushings were used on the front and rear sub frames that increased lateral stiffness and bettered NVH; that squeak may have slipped through the proverbial crack.

The 2017 Cadenza did ride well, cornering was good and acceleration was better than average.

The car’s front fascia was new. The tiger grille was certainly there but it seemed a little wider adding breadth to the Cadenza’s stance. The grille was concaved inward towards the engine bay.

The car had Z shaped lighting signatures in the front as well as in the rear. And our test vehicle had both LED headlights and taillights.

We had the top of the line Limited trim line. It came with Nappa leather, quilted seat bolsters accented by diamond-shaped stitching and it came in the optional white. We don’t know that we’d want that color during winter months here but it was good for our week-long test drive during warm weather months.

Our test vehicle was chock full of creature comforts starting with a panoramic roof. There were power folding heated mirrors, rear parking assist and a surround view monitor. A smart key with push button start/stop, heated and cooled front seat as well as a heated steering wheel and heated rear seats were part of the package. Of course there was a rearview camera with cross traffic alert.

There was a navigation system, satellite radio, an infotainment system, a premium audio system and smart phone integration systems for iPhones and Androids. Also, there were Bluetooth and voice controls.