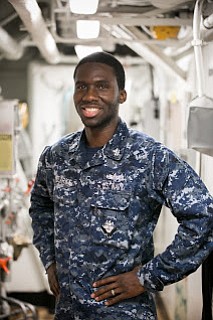 Petty Officer 1st Class Charlon Clarke is an operations specialist aboard the forward-deployed Arleigh Burke-class guided missile destroyer operating out of Yokosuka, Japan. Stethem is one of eight destroyers forward-deployed in Yokosuka.

“Growing up, I learned that you can’t control everything and you have to let some things go," said Clarke. "Being out in the Seventh Fleet, the workload is constantly changing and having a flexible mindset is essential.”

"Our alliance is rooted in shared interests and shared values," said Adm. Harry Harris, Commander, U.S. Pacific Command. "It's not hyperbole to say that the entire world has benefited from the U.S.-Japan alliance. While our alliance helped stabilize the region after the Second World War, it also enabled the Japanese people to bring about an era of unprecedented economic growth. And for the last six decades, our Soldiers, Sailors, Airmen, Marines and Coast Guardsmen have worked side by side with the Japan Self Defense Force to protect and advance peace and freedom."

Approximately 300 men and women serve aboard the ship. Their jobs are highly specialized and keep each part of the ship running smoothly, according to Navy officials. They do everything from maintaining gas turbine engines and operating the highly sophisticated Aegis weapons system to driving the ship and operating small boats.

Forward-deployed sailors are crucial to the success of the global Navy mission and earn high praise from their leaders.

“If it wasn’t for the Navy I would never have met my wife and started a family," added Clarke. "Serving to me means giving back. I plan on making this a life long career and consider it a privilege to take the watch from sailors who have served before me.”